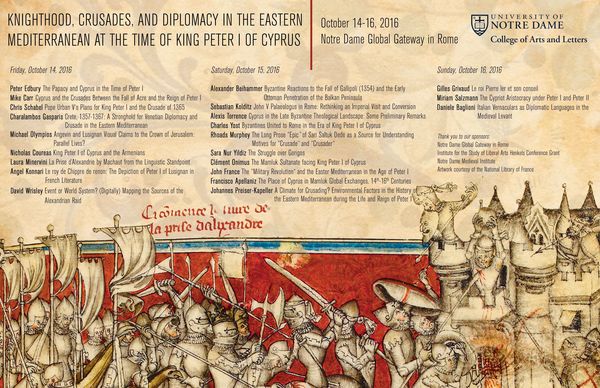 This conference focuses on a fascinating and multifaceted figure in the history of the crusades and the late medieval Eastern Mediterranean, King Peter I Lusignan of Cyprus (1328-1369). King Peter's Alexandrian crusade of 1365 was a decisive moment in the history of the later crusades,which left its imprint on a wide range of European, Levantine, and Muslim literary sources. The 650th anniversary of this event provides the international scholarly community with an occasion to reconsider both the broader historical context of this event and King Peter I's reign in general. Interpretation of the medieval Eastern Mediterranean, a hub of cross-cultural interaction, requires interdisciplinary approaches involving documents and narratives written in Latin, French, Italian, Greek, Arabic, Persian, Turkish, and other languages. With this multicultural perspective, this conference aims at contextualizing King Peter I and his deeds within the broader political, institutional, socio-economic, and intellectual developments of the Eastern Mediterranean in the fourteenth century.