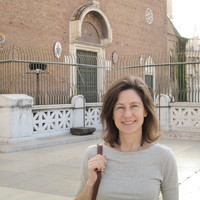 The history of art and architecture in baroque Rome has essentially been told through singular relationships between powerful patrons and great artists, with Urban VIII Barberini and Bernini as the paradigm. The patronage of Urban’s successor, Innocent X, has traditionally been perceived as paling in comparison, largely because it fails to fit this pattern. But Innocent X accomplished a great amount of building in a short amount of time, including the nave decoration of St. Peter’s, nave of San Giovanni in Laterano, Palazzo Nuovo on the Campidoglio, Palazzo Pamphilj in Piazza Navona, Four Rivers Fountain, and Villa Pamphilj. I propose a new model for understanding his contribution to the arts in mid-17th-century Rome by focusing on how he accomplished these building projects: rather than privileging a single artist, Innocent relied on a reliable network of artists and artisans across multiple sites. To exemplify Innocent’s patronage, this paper will examine the process of building the Pamphilj residential sites of Piazza Navona and Villa Pamphilj from designers to executants.