Boundaries and Borders: Choreographies among the Rum Orthodox of Old City Jerusalem 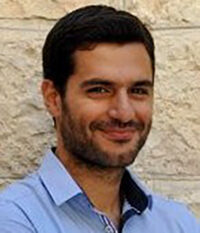 Georgios Tsourous is a social anthropologist and an Associate Fellow at the Centre of Ethnographic Studies in the University of Kent in the UK. His research, funded by the British Academy, involves the investigation of the sociocultural relationships between the different Christian communities of Jerusalem, focusing upon the Greek (called Rum) Orthodox community. Through conducting long-term ethnographic work in Jerusalem’s Old City, Georgios explored the relationships that are forged between resident clergy as well as between local Christians within the context of everyday life in a major shrine of Christianity, the Church of the Holy Sepulchre. His research interests also include Christian-Muslim relations and the impact of pilgrimage in shared sacred spaces in Israel/Palestine and Egypt.

Transportation will be provided on Shivtei Israel St. 1 (on the western side of the Notre Dame Center opposite the New Gate of the Old City). The bus will leave at 6:30pm and return at 9pm. Please RSVP at rmallek@tantur.org.

Tuesdays at Tantur is a weekly event that seeks to establish a community of conversation. Co-hosted by the Tantur Ecumenical Institute and Jerusalem Global Gateway  of the University of Notre Dame, the series nurtures open discussion on theological and other topics relevant to the life of Jerusalem and the Holy Land.