"Relieved by Prayer": Power, Shame, and Redemption in Shakespeare's Drama

Rowan Williams, renowned theologian and former Archbishop of Canterbury, will deliver a keynote lecture as part of the 2018-19 Notre Dame Forum. 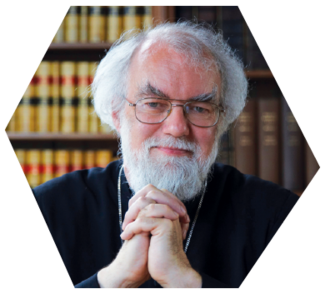 Co-sponsored by “Religion & Literature,” a Notre Dame journal housed in the Department of English, Williams will present a talk titled, “Relieved by Prayer: Power, Shame and Redemption in Shakespeare’s Drama,” in the Dahnke Ballroom at 5 p.m. Nov. 26 (Monday). A reception will follow the lecture. This event is free and open to the public.

“Rowan Williams is a renowned scholar, poet and Church leader,” said Father Jenkins. “We are fortunate to have him speak on the intersection of religious faith and literature.”

Williams shepherded the Church of England as Archbishop of Canterbury from 2002 to 2012. He is a leading figure in the study of religion and literature and currently serves as Master of Magdalene College at the University of Cambridge. He was elected a Fellow of the British Academy in 1990 and a Fellow of the Royal Society of Literature in 2003.

Educated in theology at both Cambridge and Oxford, Williams is the author of dozens of books and articles on Christian theology, belief, poetry and icons. His 2006 book, “Grace and Necessity: Reflections on Art and Love,” draws on the works of Catholic thinkers and artists like Jacques Maritain, Flannery O’Connor and David Jones to explore how human beings open themselves to transcendence. Williams is a noted poet and translator of poetry, and, in addition to Welsh, speaks or reads nine other languages.