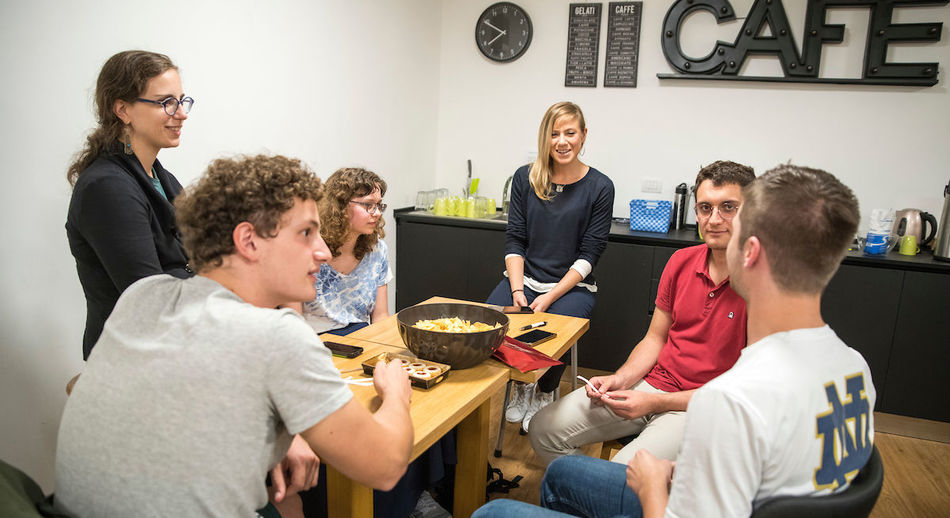 The Rome Global Gateway, one of five operated by Notre Dame International, focuses on providing students and scholars research opportunities, taking advantage of the unique combination of cultural, political, historical and religious layers that make Rome what it is today.

Officially opened in 2014, the Rome Global Gateway is situated several blocks from the Colosseum, in a quiet residential neighborhood that includes the trappings of what comes to mind when you think of Rome: cafes and shops line the cobblestone streets with motor scooters humming between the offices, apartment buildings, small piazzas and churches. It has the benefit of easy access to many of the classic Rome monumental sites, but in a setting in which the students can rub shoulders with everyday Italians. It’s here that more than 100 students in a variety of academic programs learn to become global citizens while they learn about their field of study.

In 2001, the University established a more robust study abroad program for undergraduates. Thirteen years later, the Gateway facility was opened, consolidating in one place the School of Architecture program with other academic initiatives and programs. In some ways, the University’s presence in Rome accelerated after its completion: In 2016, the Rome International Scholars program was launched, which provided an enhanced way for students to conduct independent research projects and take on internships in the Eternal City. And in 2017, a residence hall, the Villa on the Celio, was completed a few blocks from the Gateway.

Read the story in full here.

Originally published by Colleen Wilcox at rome.nd.edu on May 10, 2019.