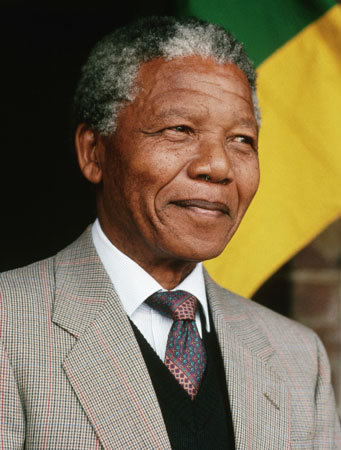 “Many would say that the world just lost its last great, true, statesman,” said Kellogg Institute for International Affairs Faculty Fellow Catherine Bolten as the news broke of Nelson Mandela’s death on December 5. “I would like to think that Nelson Mandela was more special and singular than that.”
“There are many great statesmen, but Mandela was the only person who could make trust, forgiveness, and hope a seductive prospect to absolutely everyone he met. His gift was not to call a perceived enemy over to his side, but to cross that line himself, put his arm around his adversary, and walk with him. Those who knew him best emphasized his humility, a quality we can all learn from.”
As cochair of the Kellogg Institute’s Africa Working Group, Bolten has organized a year-long celebration of Mandela’s life and work. In spring 2014, the group will host two important public figures from South Africa for public lectures at the Kellogg Institute as well as class visits and meetings with students and faculty.
—Dr. Allan Boesak, a cleric in the Dutch Reformed Church of South Africa, is a widely known liberation theologian and anti-apartheid activist who played a critical role in pressuring the South African government to release Mandela from prison. His visit is scheduled for March 19–20.
—Chester Williams, who will visit April 2–6, broke the color barrier in 1995 when he joined the previously all-white Springboks, South Africa’s national rugby team (a story portrayed in the filmInvictus).
“Mandela believed that if he could get the nation to rally behind the iconic sport of apartheid, he could move the nation onto a path of peace and acceptance,” says Bolten, an Africa specialist who is assistant professor of anthropology and peace studies at the Kroc Institute for International Peace Studies.
The Africa Working Group will also host historian Neil Roos of the University of the Free State (South Africa) for a January 23 discussion of his forthcoming book on the culture of apartheid.
The series began in the fall with two talks: one on the social and historical context of South Africa by political scientist Peter Walshe and another on the role of art and the politics of beauty in the anti-apartheid movement by Yale University historian Daniel Magaziner.
Contact:  Catherine Bolten at cbolten@nd.edu or 574-631-5099