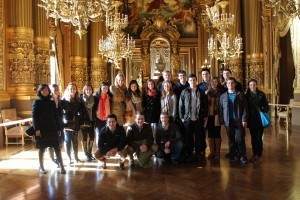 On Friday 21 February, students taking the new Art History course Encounters: Art in London and Paris c. 1850-1900 enjoyed a busy day out in Paris.
Our first stop was the Opera Garnier (opened 1875), the crowning glory of Second Empire Paris, placed at the intersection of the grand boulevards laid out during the modernization of Paris led by city-planner Baron Haussmann during the 1860s. After taking in the extraordinary grandeur of the interiors (the perfect complement to our study of theatre paintings by Degas, Renoir and Cassatt), we ate lunch in the 6th floor restaurant of Galeries Lafayette, which commands stunning views across Paris; this glamorous department store still possesses the fin-de-siècle glass dome designed to attract the same affluent bourgeoisie who also constituted the most important audience for nineteenth-century art.
An afternoon walking tour through the streets of Paris offered the chance to take in key locations linked to our study of nineteenth-century art, including No. 35 Boulevard des Capucines (venue for the First Impressionist Exhibition of 1874), the Place Vendome (closely associated with the radical Paris Commune of 1871), and the Tuileries Gardens, where we strolled in the footsteps of Charles Baudelaire and Edouard Manet, before crossing the Seine to the Musée d’Orsay. There we examined major works by key artists studied during the first half of the semester, including Cezanne, Degas, Manet, Monet, Pissarro, Renoir and their contemporaries, before ending our day with a tour by “petit train” through the artistic quarter of Montmartre, home to artists including Degas, Monet, Picasso, Pissarro, Renoir, Seurat, and Toulouse-Lautrec.
- Lois Oliver (Professor of Art History, University of Notre Dame’s London Global Gateway)
Image: Lois Oliver with students at the Opera Garnier ©Lois Oliver