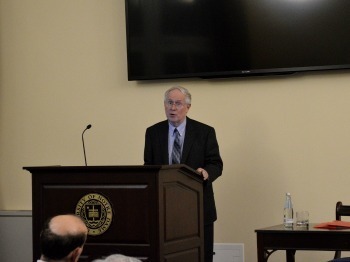 On March 4, 2015 the London Global Gateway hosted Paul Brand, Emeritus Fellow at All Souls College, University of Oxford, for a discussion of the English laws regulating Jewish communities before their expulsion in 1290.  The talk took place as we approach the 800th anniversary of Magna Carta, the foundational charter of English rights and liberties.

In his talk entitled Jews and Law in England 1190-1290, Brand traced the settlement and expansion of Jews across the country, analyzed the royal charters that provided them with protection and privileges, and outlined the development of royal legislation enacted in the thirteenth century under which Henry III and his successors imposed increasing social control over the Jews of England.

Much of this legislation was designed to insure the geographic and social segregation of the Jewish community. It restricted where Jews could reside, and the forms of land tenure that they could hold. Sexual contact between Christians and Jews was prohibited, and Jews who had not secured exemptions were required to wear special identifying insignia in part so as to prevent any such unknowing contact. Christians were not permitted to serve Jews as wet-nurses, bakers, brewers, or cooks, and were forbidden to eat with Jews or to stay in their houses. 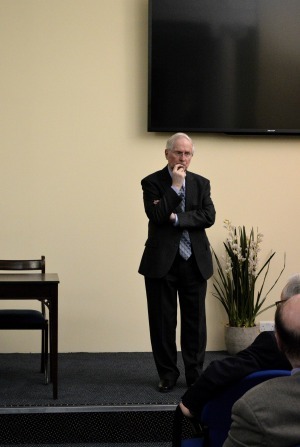 Other legislation prohibited the construction of additional synagogues, and required services conducted in existing synagogues to be so quiet that Christians could not hear them. Jews had to pay parochial dues to the local rector; they were not permitted to eat meat during Lent; they were forbidden to criticize the Christian faith in public; they were not permitted to enter churches or chapels; and they were prohibited from interfering with any fellow Jew who wished to convert to Christianity.

Jews enjoyed the privilege of lending money at interest whereas Christians did not, and by the end of the twelfth century, England’s Jews were engaged almost exclusively in money-lending.  Jews were permitted to resolve disputes among themselves, but litigation between Jews and Christians was heard by a special court, the Exchequer of the Jews. This court’s docket consisted principally of actions on debts owed to Jewish creditors. Maximum rates of interest were imposed, and creditors’ remedies were by modern standards limited.

Legislation enacted in 1275 substantially curtailed the existing rights of Jewish creditors. In 1290 the Jews were expelled from England, ostensibly because they had persisted in money-lending rather than engaging in mercantile trade or paid labor. King Edward I thereby acquired title to all Jewish loans and homes. Professor Brand closed by observing that the Jews were not re-admitted to England until the mid-17th century, by Oliver Cromwell.

Barry Cushman, professor of Law at the Notre Dame Law School and London Law Centre, who organized the lecture, remarked, "The Law Programme was very fortunate to host one of the world's most eminent legal historians speaking on a fascinating and timely topic to an appreciative and fully engaged audience."