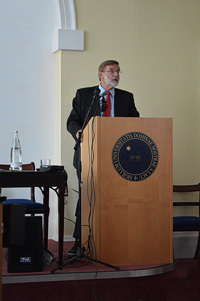 Geoffrey Parker (Andreas Dorpalen Professor of History, The Ohio State University) delivered a lecture on Climate and Crisis: War, Famine, and Empires in the 1590s on April 29, 2014, at the University of Notre Dame London Global Gateway.  The lecture was a Global History Seminar event, hors-série, organized by Felipe Fernández-Armesto (William P. Reynolds Professor of History, University of Notre Dame, and Professor of Global History, London Global Gateway), and the Institute of Historical Research, in collaboration with the Oxford Centre for Global History.
Warren von Eschenbach, Director of the London Global Gateway, opened the lecture, after which Fernández-Armesto introduced Parker, his work, his influence on thinking in the historical discipline, his contribution to global history, and his new book Global Crisis: War, Climate Change and Catastrophe in the Seventeenth Century.
In his talk, Parker asked, “What happens when you factor in climate and stray beyond Europe?” in writing of the 1590s crises that focused predominantly on war.  He traced the disasters of the “nasty nineties” around the globe, including volcanic eruptions, floods, and unusually cool summers in Central Europe, drought in North America, and famine in China, as well as episodes and the effects of El Niño (a band of warm ocean temperatures).
Parker then focused on the social and economic effects of climate crisis and war in Europe, especially on the “plagued legacy” that Felipe II of Spain left behind.  He concluded that climate change alone did not cause the European crisis of the 1590s,which was rather the result of a synergy between this and the determination of leaders to make war.  He claimed, however, that “creative destruction” produced what he called the first welfare state in the world.
The talk was followed by an in-depth and engaging Q&A session and a reception.  Notre Dame staff and faculty, both in the UK and by simulcast in Indiana, as well as UK academics and general public attended the event.  Keith Surridge, professor of History at the London Global Gateway, said, “Professor Parker gave an extremely erudite talk on a neglected aspect of late-sixteenth century history.  He convincingly demonstrated that to understand decades of crisis, such as the 1590s, historians must seek global explanations, in this case climate change.”
Contact: Emily Grassby, Communications and Planning Specialist for London Global Gateway, egrassby@nd.edu
Image ©University of Notre Dame London Global Gateway