The Ebola virus outbreak this week is challenging World Health Organization (WHO) officials around the world. On Wednesday, 67 WHO disease professionals have been mobilized to prevent further spread of Ebola and address the infection in hopes of stopping the outbreak in new areas of West Africa. 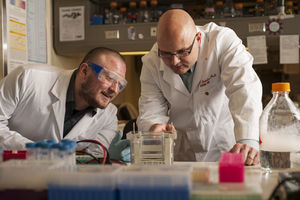 Cases in Guinea and Liberia have been confirmed, as officials are investigating new reports of disease in Sierra Leone, Ghana, and Mali. “The numbers are changing every day.” Stated Keiji Fakuda, Assistant Director-General for Health Security and Environment, during a WHO press conference this week. In Guinea there have been 157 people infected and 101 deaths and 21 cases in Liberia including 10 deaths.

Ebola is most commonly found on the continent of Africa. There are no current vaccines or approved therapeutics available for any of the five strains of Ebola. The Zaire strain is the most common and, unfortunately, the most deadly with mortality rates as high as 90% within days of contraction.

While WHO health care professionals scramble to contain the outbreak and address immediate health needs, researches at the Indiana University School of Medicine-South Bend (IUSM-SB), continue to make research discoveries toward the identification of drugs that would be effective against the Ebola virus. In the Fall of 2013, Robert Stahelin, PhD, Adjunct Associate Professor of Chemistry and Biochemistry at the University of Notre Dame and an IUSM Showalter Scholar and Associate Professor at IUSM-SB as well as a faculty member of the Eck Institute for Global Health at the University of Notre Dame, revealed how the most abundant protein that composes the Ebola virus, VP40, leaves the host cells and spreads the infection to other cells in the human body. This finding could pave the way for the development of new drugs and strategies in the fight against this deadly disease.

“My lab and I are excited by recent developments in our studies that demonstrate inhibition of Ebola VP40 with small molecules may be possible,” notes Stahelin.

“The Eck Institute for Global Health supports fellowships to graduate students who work on cutting edge global health research such as Ebola,” says Katherine Taylor, Director of Operations. “Emmanuel Adu-Gyamfi received one of our coveted fellowships for two years while working on his doctoral degree in Dr. Stahelin’s Laboratory. He received his degree last year and is continuing his research as a postdoctoral researcher in the laboratory of Dr. Robert Lamb at Northwestern University where he studies viruses that cause respiratory tract infections.”

“My laboratory’s work aims to progress our understanding of the mechanisms by which reversible binding of human and viral proteins to different cell membranes is mediated and regulated, with an emphasis on how viral and human proteins assemble on cellular membranes.” Stahelin states, “The long-term objective of this research is to apply principles learned from biochemical and biophysical studies to the generation of novel therapeutics to combat cancer and infections diseases such as Ebola and HIV.” The international vaccine community targets the Zaire and Sudan strains, while the Stahelin lab studies these two strains as well as Ebola Reston.

The disease is usually transmitted by body fluids and contact from human to human. Public health measures are being taken to track contact. Sadly, health care workers, family physical contact at home, and attending funerals with rituals that include contact with the dead amplifies direct contact with the virus. The WHO is hopeful that, even with high fatality rates and a large geographic distribution of cases thus far, the outbreak can be controlled.

The Eck Institute for Global Health is a university-wide enterprise that recognizes health as a fundamental human right and endeavors to promote research, training, service to advance health standards for all people, especially people in low and middle-income countries, who are disproportionately impacted by preventable diseases.