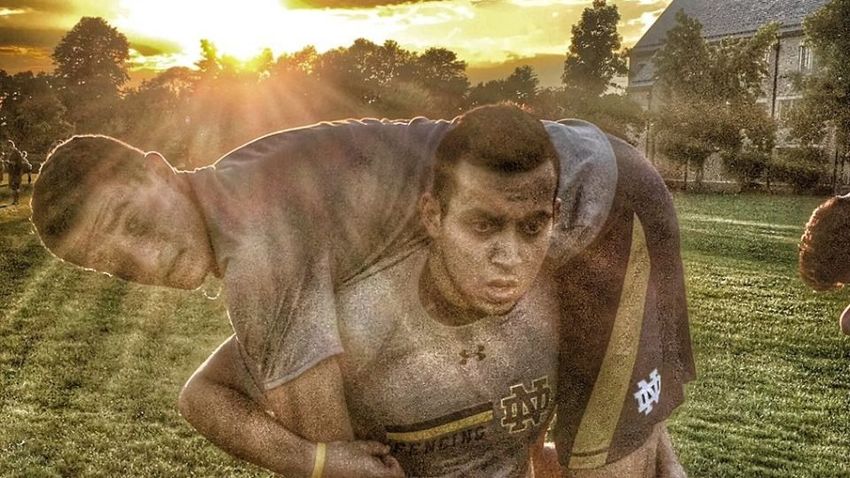 Hazem Khazbak carries teammate Jonah Shainberg during training with "The Program," which uses military boot camp techniques to help develop teams. Khazbak and Shainberg have developed a close friendship since arriving on campus, tied together by faith in each other, their team and Notre Dame.

NOTRE DAME, Ind. — On paper, they appear to be almost complete opposites: a Jewish New Yorker from Rye, New York, and a Muslim Egyptian from Lexington, Kentucky.

On the strip, under the bright lights of national championships and Olympic trials, they compete in different events.

But off the fencing strip, and far removed from the intensity of Notre Dame head coach Gia Kvaratskhelia’s practices, they are much more. They are teammates, roommates, and, above all else, family.

Senior Notre Dame fencing captains Jonah Shainberg and Hazem Khazbak are no strangers to the concept of diversity. Both have competed their entire lives in a sport that has a rich global history, and, over the years, Shainberg and Khazbak have amassed quite the international pedigree for themselves. The former, an All-American sabreur, was a silver medalist at the 2015 USA Junior Championships, while the latter spent the 2015-16 season training for a chance to compete in the 2016 Olympics in Rio de Janeiro as a foilist alongside the Egyptian National Team.

Nevertheless, the richest cultural experience in these two young men’s lives can be unearthed behind a friendship — one that has been continuously cultivated over four years at a Catholic university in Northern Indiana.

It is no secret that Notre Dame is proud to be a Catholic institution. For those who practice another religion, such as Islam or Judaism, it is easy to see how a student body made up of over 80 percent Roman Catholics could invoke concerns about fitting in. Both Khazbak and Shainberg admitted to feeling trepidation before their respective first visits to the school as recruits, as Khazbak alluded to, recalling one of the duo’s first interactions:

“Do you remember who you (first) called?”, Khazbak laughed, in reference to Shainberg’s campus visit. “You called me. You said, ‘Hey, how does it feel to be a different religion at the university?’”

After visiting campus for the first time and sensing the inclusivity of the university’s culture, the decision of whether to commit to Notre Dame became a much easier one for Shainberg.

If you ask Kvaratskhelia, it is obvious why these two were a natural fit at Notre Dame.

“Hazem and Jonah are both incredible athletes; that's what first got them on our radar,” he noted. “When they made their recruiting visits, we saw that their personal qualities were much more important than their physical skills. They are humble, compassionate and kind young men, then and now. They also both felt that Notre Dame would be a great platform for developing their athletic, academic and leadership skills.”

With such similar personalities and skillsets, it was only a matter of time before the duo developed a close friendship through their training and by competing side-by-side.  “From the beginning … we always felt comfortable communicating with each other about anything that’s on our mind,” Khazbak remarked. “It’s amazing to have someone like that in your life that you can be that open to and have confidence and faith in him that they have the best intentions for you.”

Shainberg speaks of his teammate with a similarly high regard, commenting that Khazbak is “the strongest person in the world … in terms of the size of his heart, how hard he works and dealing with the adversity he’s gone through,” referring to the knee injury he sustained during Olympic training. “Even when (Hazem) wasn’t at this university, in his training for the Olympics, and when he was in Kentucky, he was such a strong presence on this team … and I have always looked up to that. The fact that we get to live together is an honor — we’ve been talking about it for years.”

Through their leadership by example and their chemistry on and off the strip, Shainberg and Khazbak hope to continue the program’s tradition of excellence by following up on last season’s NCAA Championship with a similarly successful year.

“There’s a phrase we had going through the season last year: ‘One team, one heartbeat,’” Khazbak notes. “I think that envelops everything. … We come here, we are excellent together, and we are one unit — not 60 different competitors.”

The importance of unity becomes all the more relevant when one takes a glance at the team roster for the upcoming 2017-18 season. In just this season alone, the co-ed roster includes a foilist from Italy, a sabreur from Russia, and epeeists from France and Canada joining forces to represent one of the university’s most decorated and diverse programs. With this amount of diversity year-in and year-out on Kvaratskhelia’s championship-pedigree teams, it takes highly cultured leaders such as Shainberg and Khazbak to instill a tone of excellence that traverses cultural barriers and drives the program to such sustained success.

Behind the desk of Notre Dame Vice President and James E. Rohr Director of Athletics Jack Swarbrick hang five framed photographs, each one carefully selected to represent one of the pillars of Notre Dame athletics: Excellence, Community, Education, Tradition and Faith.  Among these five pillars, none truly resonates with a program more than the word “faith" manifests itself with the Irish fencing team.

"When you come to Notre Dame, you see the word ‘faith’ everywhere around you,” Khazbak notes. "But like I said, you look to your left and look to your right, and you really are thankful for the person next to you. I have no faith in someone more than I have in Jonah and in this team.”

Swarbrick’s definition of “faith” as a pillar of Notre Dame athletics is multifaceted. On one hand, “Catholic faith” is represented by the “pre- and post-game team prayers, our integration of the members of the religious community into our program and the team masses.” But on the other hand, as Khazbak alluded to, faith is equally reflected in the trust that teammates “must have in each other in order to succeed, and the respect we must have for our opponents if we are to effectively demonstrate the values of Notre Dame,” in Swarbrick’s own words.

There is certainly no denying the religious significance of the Catholic faith on campus. But to Shainberg, the school’s focus on faith does not necessarily have to exclude other religions.

“What I love about Notre Dame and is one of my favorite sayings is ‘God, Country, Notre Dame,’” Shainberg said. “Catholicism is a beautiful part of the university, but at the end of the day, I think it is about being spiritual, believing there is a higher being out there — a spirit — and I know that I believe in that. ‘God, Country, Notre Dame’ — it is the same God at the end of the day.”

In an historic athletic department where excellence is a habit, faith is truly a gift to two outstanding young men and one world-class team.

Jack Grassey is a graduate student assistant for Fighting Irish Media, and has been part of the Fighting Irish athletics communications team since August of 2013. A native of Winchester, Massachusetts, Jack is a 2017 graduate of the University of Notre Dame and is currently enrolled in the Masters of Science in Accountancy Class of 2018. Jack also plays on the Women’s Basketball All-Male Practice Team at Notre Dame.

Article originally published by Jack Grassey at und.com on November 29, 2017.