On Saturday, November 22, 2014, the London Global Gateway held an open house event at its Suffolk Street building, Marian Kennedy Fischer Hall. It brought together Notre Dame alumni living and working in London, some of whom had studied in the London programs, local academics, businessmen, and friends of the University, to network, gain a better understanding of the London Global Gateway, and to highlight research of its faculty members. 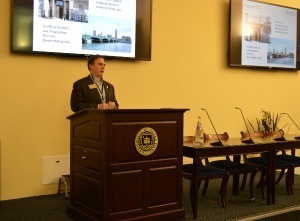 The afternoon commenced with a welcome by the London Global Gateway director, Warren von Eschenbach, who explained the concept of a Global Gateway and how they represent Notre Dame's position in international higher education, acting as embassies and ambassadors for the University through outreach and engagement with the local community. Quoting J. Nicholas Entrikin, vice president and associate provost of Notre Dame International, von Eschenbach described the Global Gateways as "a portal so we can look out on the world and it can look at Notre Dame… an opportunity to have a global footprint and let the world know more about our great research and teaching".
Participants were able to attend concurrent talks given by some of the London Global Gateway's U.K. and visiting faculty members. These talks not only gave audiences an introduction to some of the topics students study while in London, but also showcased the faculty members' areas of expertise and scholarship. Keith Surridge, for example, who has taught history for the London Undergraduate Program for over twenty years, gave a talk entitled The First World War: A Battlefield Tour, in which he transported his audience back in time with a gallery of both famous and personal photos from battle sites and trenches, focusing on the battle of the Somme and Third Ypres. He also discussed the living conditions of soldiers on the front line and the introduction of tanks in the First World War. 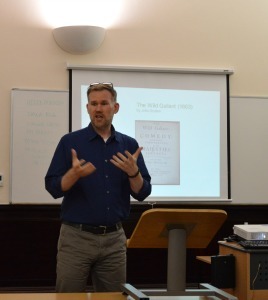 Other talks included Notre Dame visiting law professor, Bruce Huber, on Is Fracking the Answer? The Law and Politics of Energy Today; London Undergraduate Program theatre lecturer, Jay Skelton, on The Stages of Power: London Theatre and its Interpretation of British History; and Anthony O'Mahony, theology instructor for the London Undergraduate Program, on Christianity in the Middle East - Present and Future Challenges.
The evening concluded with a welcome from Eugenio Acosta, international alumni relations program manager, who encouraged greater collaboration between international alumni clubs and the Global Gateways, and a game watch party to cheer on the Fighting Irish as they took on Louisville.
“The event was a success not only in helping Notre Dame alumni and friends gain a better understanding of the goals and aspirations of the Global Gateways, but was a great opportunity for our students to interact with alumni living abroad,” said von Eschenbach.
Check out some photographic highlights from the event on our Facebook page.