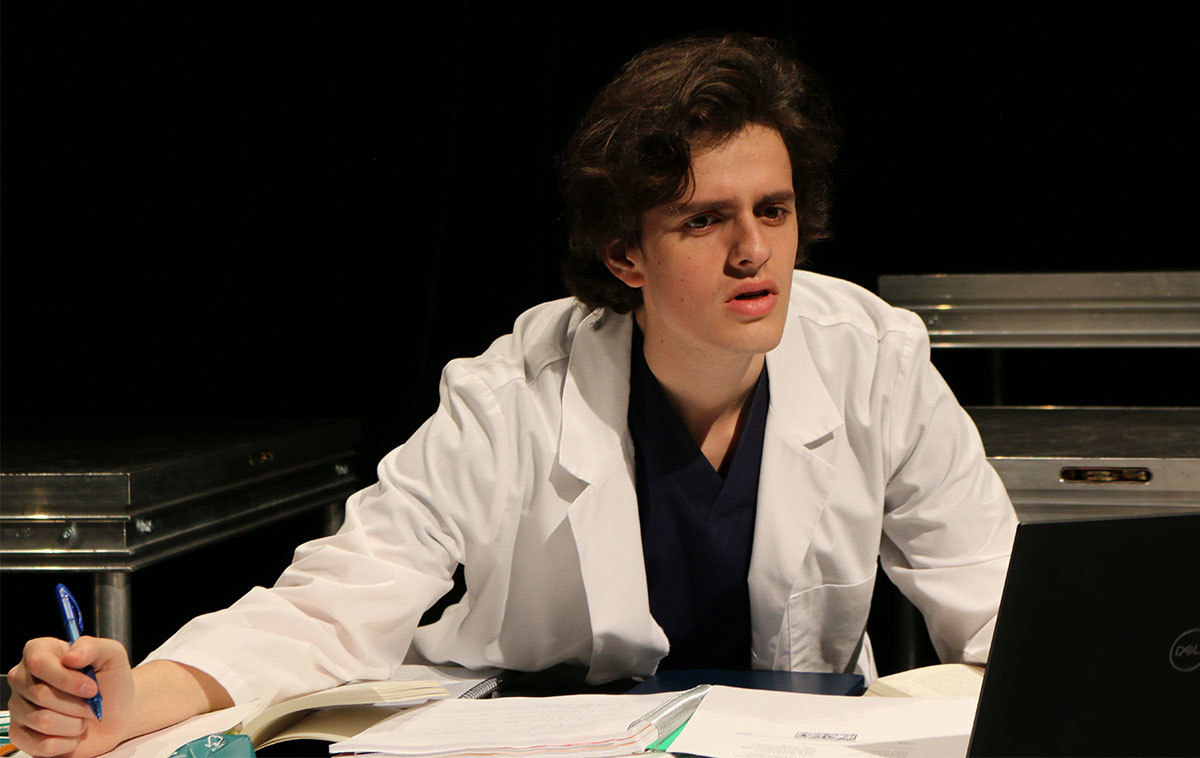 Jay Rivera-Herrans wrote the book, lyrics, and music for — and stars in — a new musical, Stupid Humans, which opens Thursday. The show is the semi-autobiographical account of a student who discovers his passion is for music, not medicine.

A dozen Notre Dame students are huddled around a keyboard at the back of the Regis Philbin Studio Theatre on a snowy Sunday night.

On cue, the music starts and the ensemble starts chanting, “Won’t give up, won’t give up,” while one student stomps to the beat in Converse tennis shoes.

After running through the song twice, they head to the stage to rehearse it again with choreography. As the group fans out, one young man takes center stage. 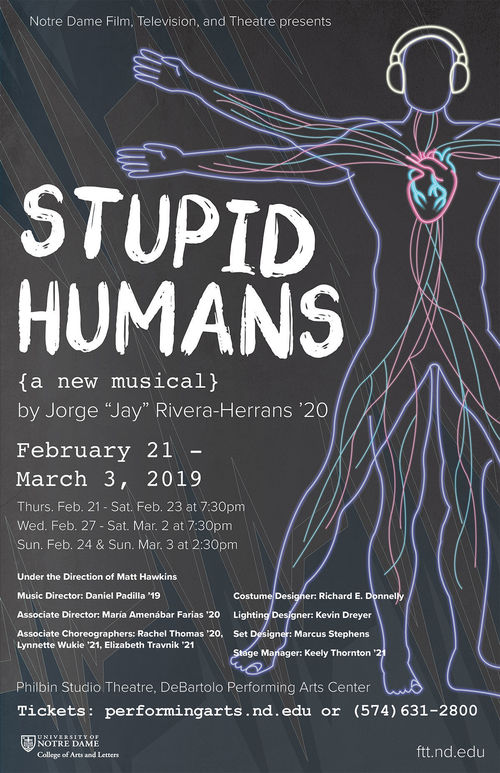 “I’m exuberant, tenacious, and a med school dropout. You might think of me as just a cop out. But in reality, I love to sing and write. It’s part of who I am,” he sings.

Like the character he created, Jorge “Jay” Rivera-Herrans is exuberant and tenacious, but no one could mistake him for a cop out.

A junior film, television, and theatre major, he has written the book, lyrics, and music for a new musical — Stupid Humans, which opens Thursday and runs through March 3 — and is also playing the leading role.

As the song fades out, the cast moves directly into one of the most pivotal scenes of his semi-autobiographical work, which Rivera-Herrans drew from a difficult conversation he had with his own father about his academic plan at Notre Dame.

“Dad, I dropped out. I dropped out of med school,” his character Indigo says to his on-stage father as the ensemble looks on. “I want to be a singer-songwriter.”

“Everyone, we might know that Indigo dropped out, but we don’t know how dad is going to react. That’s how we can share in that tension,” Hawkins said.

“After seeing Jay’s focus and determination, I knew Notre Dame had to produce this work. As educators and artists, we are in a unique position to help support the new voices of the next generation, and I’m proud to be part of that conversation.”

Growing up in Puerto Rico, Rivera-Herrans knew he was going to be a doctor.

In high school, he was president of the Medical Youth Club and accumulated more than 200 hours shadowing surgeons over the course of three summers. 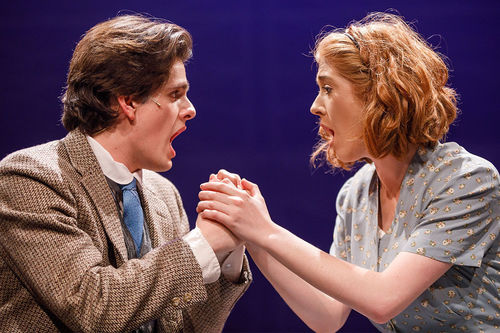 Rivera-Herrans, in a scene from FTT’s 2018 production of Spring Awakening.

“I don’t even know exactly where it came from,” he said. “But I was certain. I just remember everyone telling me I was going to be a doctor, my parents, my family, and I never really questioned it.”

When he came to Notre Dame, he chose a science-business major and began to tackle his pre-med requirements in his first semester. But he also discovered PEMCo, a student-led musical theatre group, and on a whim, auditioned for their production of Grease and was cast as Doody.

Rivera-Herrans, who had acted in a few shows in high school, began to realize just how much he enjoyed theatre.

“It became so apparent because I would get very excited for rehearsals, and then I would go back to my pre-med homework and hate it,” he said. “I had found something I really liked and felt I was good at, and my morale for my science work just kept decreasing. I remember the day I switched from pre-med to theatre. I was so excited — a little terrified, but also super excited.”

In his second semester, Rivera-Herrans found he was looking forward to his new FTT classes in a way he never had other coursework. But like Indigo, he did not tell his parents about his new plan until a few weeks after he’d made the switch.

“They were shocked,” he said. “And it was rough for a while. My father and I, especially, were butting heads and arguing. But everyone was questioning me about it — even my high school teachers. It felt like I had made a choice, and the entire world wasn’t happy with my choice.”

Feeling isolated and afraid of disappointing his family, Rivera-Herrans turned to writing.

“I had written pop songs my whole life on the side, and I knew I loved theatre,” he said. “I felt so alone, so I just dove in and decided to start writing a musical. After one phone call with my father, I even went to the piano and made a song about the argument we’d just had. It’s called ‘Father vs. Son.’”

In his sophomore year, Hawkins — an acclaimed Chicago-based theatre director — joined the Notre Dame faculty, and Rivera-Herrans enrolled in two of his classes.

One day, when Hawkins asked each student to perform a song from any musical, Rivera-Herrans took a risk and decided to sing one of the songs he’d written himself.

“That first song was called ‘When Pigs Fly,’ and it’s the only song left whose chorus and first verse have not changed since I started this two years ago,” he said. “At the end of class, Matt stopped me and said, ‘If all of the songs in your musical are like that, I want to see if we can make it happen here.’

“Matt believed in me. He saw the potential at a time when this was a terrible thing. The songs were great, but the story didn’t always make sense yet.” 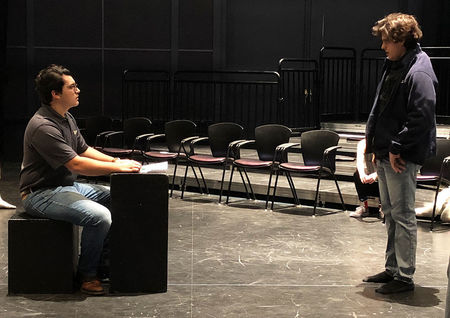 “Jay is not only a gifted composer and lyricist, but also has the drive and the passion to do the work. And creating new work is hard,” Hawkins said. “After seeing his focus and determination, I knew Notre Dame had to produce this work. As educators and artists, we are in a unique position to help support the new voices of the next generation, and I’m proud to be part of that conversation.”

Along with writing the songs and story of Stupid Humans, Rivera-Herrans also landed two lead roles in the span of a few months — FTT’s musical Spring Awakening and the South Bend Civic Theatre’s production of In the Heights.

Seeing his son thriving in his new major, Rivera-Herrans’ father began to come around. He also visited Notre Dame to see his son in both shows last spring.

“I am so thankful that he’s accepted it now,” Rivera-Herrans said. “I was talking on the phone with him a few weeks ago and mentioned I was struggling with one of the character’s backstories, and he even made some suggestions. When I hung up, I realized that my dad had just helped me with my musical. I was so excited.”

“It’s been such an exciting opportunity to develop and showcase new work,” Hawkins said. “And the lab class helped to facilitate a high level of student leadership on the project.”

“When we first tried staging parts of it in the lab, it was really cool,” Rivera-Herrans said. “To see people singing the songs I’ve been writing for the first time was incredible.”

A community of support

Rivera-Herrans, who speaks as if his Notre Dame experience is divided up by shows instead of academic years, isn’t sure what comes after Stupid Humans closes in March.

He plans to continue working with Hawkins and many of the students he’s grown close to in this process — and he hopes to share the musical with a wider audience in the future. 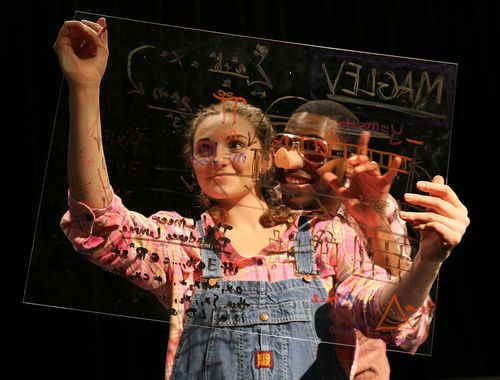 “I want this to go on to other theatres,” Rivera-Herrans said. “But I haven’t even really thought about what is after Notre Dame, because once I start thinking about that, I stop making good work. I am just focusing on working as hard as I can and putting all of my heart into this musical.”

His goal for Stupid Humans is simple.

“I want to inspire people who find themselves in a similar situation,” he said, “those who are on a path they’ve been pushed toward when there’s something else they want. It’s to encourage those people to make the switch and just go for it — and not to do it halfway, but to just dive in.

“At the same time, it’s a message for the parents and teachers and mentors to encourage them to be accepting and supportive. Because when you have a community that is supporting you and helping you pursue what you love, it’s amazing.”

“I want to inspire people who find themselves in a similar situation, those who are on a path they’ve been pushed toward when there’s something else they want. It’s to encourage those people to make the switch and just go for it — and not to do it halfway, but to just dive in.”

Originally published by Carrie Gates at al.nd.edu on February 19, 2019.