Former Tshingua University President Gu Binglin continued his efforts to build the relationship between the University of Notre Dame and one of the top universities in China when he visited in May to receive an honorary degree. 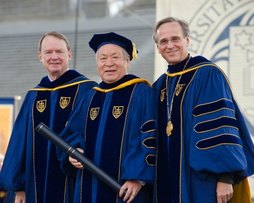 Gu, a leader in the field of condensed matter physics and computational materials science, received an honorary doctor of science degree at Notre Dame’s 168th University Commencement Ceremony on May 19. Elected to the Chinese Academy of Sciences in 1999, he served as dean of the Graduate School and vice president at Tshingua before his tenure as president from 2003 to 2012.

Gu has built a long-standing relationship with Notre Dame ever since he conducted research at the University as a visiting professor in the 1985-86 academic year.

During the Commencement weekend visit at Notre Dame, Gu met with the deans of the science and engineering colleges, attended receptions with international students and Asia Studies professors, and toured new research facilities. He was also able to visit with former Notre Dame President Rev. Theodore M. Hesburgh, C.S.C., who he had befriended during his time as a visiting professor.

Gu’s relationship building has had mutual benefits for both universities, helping build an academic bridge between Beijing and South Bend.

As Tshingua’s president, Gu was instrumental in establishing Notre Dame’s International Summer Undergraduate Research Experience (iSURE), which provides opportunities for undergraduate students from select international universities to participate in science and engineering research at Notre Dame during the summer. The program provides international students with valuable hands-on research and helps them identify future paths in academics and career, including opportunities to attend Notre Dame for graduate school.