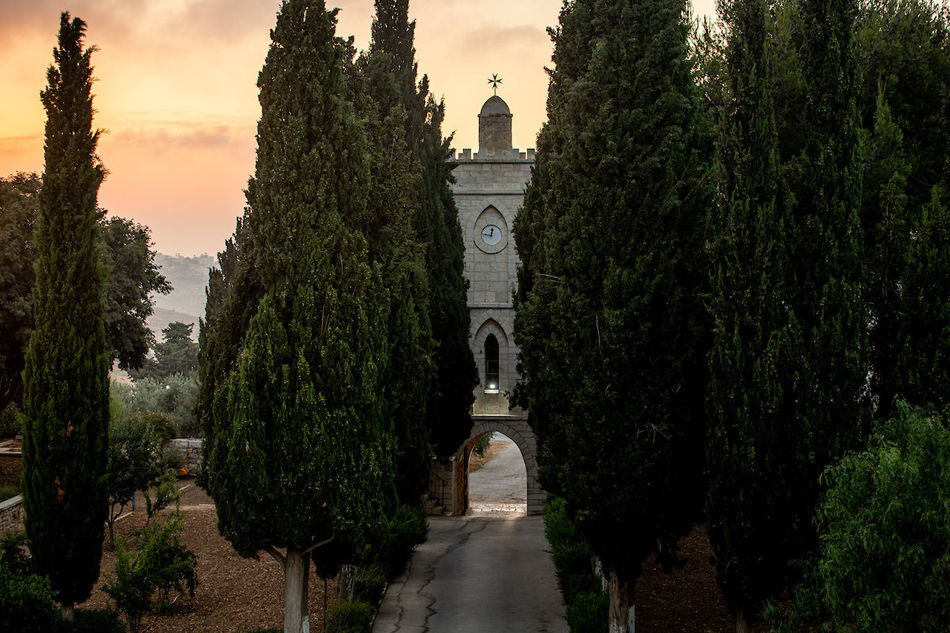 Originally published by the Office of Public Affairs and Communications.

In the 1980s, Notre Dame undergrads began arriving at Tantur for study abroad programs, and the Ecumenical Institute began receiving more continuing education visitors — clergy from different Christian traditions from around the world who come to Tantur for a pilgrimage and ecumenical experience in the Holy Land. Meanwhile, the institute increased its role in the region. During the 1990s, Tantur became known as a convener for various groups, often among those who were looking to work on the Palestinian-Israeli conflict. In this, Tantur’s location again proved advantageous: Almost all parties in the region view Tantur as neutral ground, even if access to the site by Palestinians was made more difficult by the installation of a border wall around Bethlehem in the early 2000s. Still, Tantur Ecumenical Institute carefully built a reputation in the vicinity as a place of common prayer among Christians, with active interfaith and multilateral involvement. A colorful painting, framed, of Tantur entrance and Notre Dame’s Golden Dome. Artwork hangs on the wall at the University of Notre Dame at Tantur.

The University took the opportunity of the renewal of the lease with the Vatican to re-evaluate how fulfilling the original mission of the project can continue, while maximizing the potential in other areas of study. In 2014, the University opened the Jerusalem Global Gateway at Tantur, utilizing part of the existing building complex. Global Gateways, operated by Notre Dame International, are part of a global strategy to provide students and faculty opportunities to engage in study and research with international universities and scholars. (The University has four other Gateways, in Beijing, London, Dublin and Rome.) Planning for the future, the University embraced a name change; the collective presence is now known as the University of Notre Dame at Tantur, a title that includes the Tantur Ecumenical Institute and the Jerusalem Global Gateway.

“We’re one of only two U.S. universities to have a physical presence in Jerusalem,” noted Michael Pippenger, associate provost and vice president for internationalization. “To be able to be in the heart of a whole series of conversations and dialogues, and challenges and opportunities, is something that’s unique for our faculty and unique for our students, and we are very grateful to be there. And to that end, we’ve wanted to grow our presence, grow our identity. Tantur Ecumenical Institute is there and continues to thrive and flourish, but so too do our faculty and students in a whole host of other ways that we hope will attract more people to learn about Notre Dame and want to be involved with us.”

“I see it as an expansion, an extension,” said Appleby Purcell. “When I think of the University of Notre Dame, and its Catholic mission, that obviously includes the study of ecumenism and theology. But also, we have a responsibility to engage in intellectual inquiry and research across all disciplines, but rooted in a faith tradition that provides a unique and very important lens through which to look at science, engineering, political science, issues of human development.”

Read the story in full here, originally published on nd.edu.

Originally published by Colleen Wilcox at jerusalem.nd.edu on November 15, 2019.