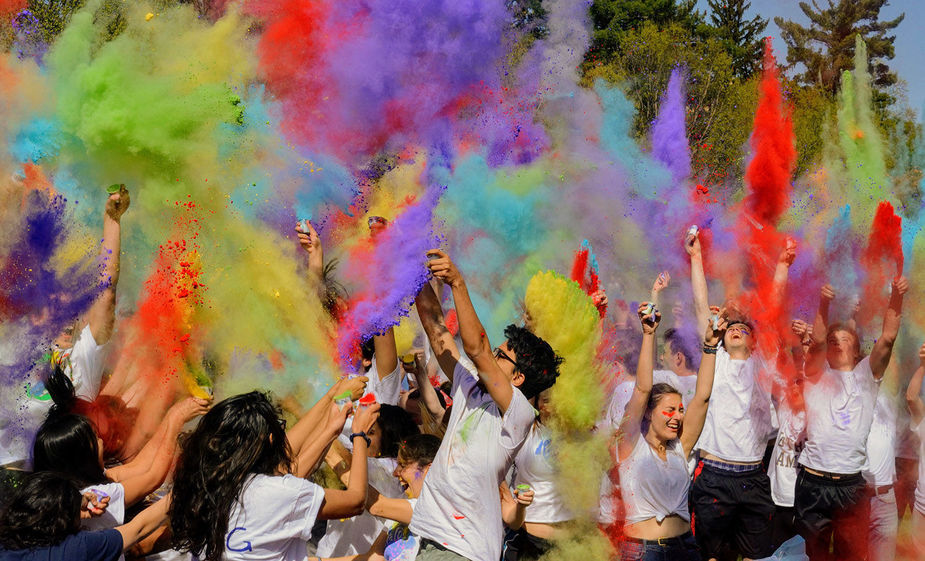 More than 500 pounds of vibrant color was thrown into the air as part of an ancient Indian spring festival. While students had a lot of fun splashing brilliantly colored dyes on each other, there’s a deeper meaning behind the colorful event. Holi, also known as the festival of colours, signifies the arrival of spring and the triumph of good over evil. The South Asian Student Association (SASA) hosted the event on Friday, April 26 on the South Quad as a way to introduce this major Hindu religious festival to students.

It’s traditionally celebrated on March 20 and 21, but student organizers pushed it back a month to take advantage of warmer weather. More than 200 students showed up in white shirts to participate in the festival.

“It’s mayhem,” says Caleb Parikh, president of the SASA. “You have color blowing in your face, your hair turns different colors, and you can’t see your skin color anymore – it’s great.” 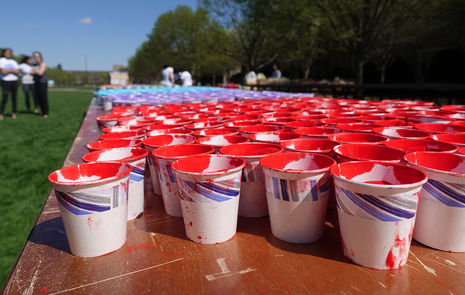 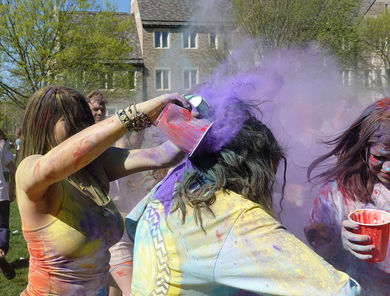 As part of its mission, the SASA is working to promote rich and culturally-diverse events throughout the year. Parikh says the holiday is incredibly important to Indian culture and it needs to have a big presence on campus. This year, the group decided to try and blend the two cultures together through color and music.

“We want to really educate students on the cultural significance of this holiday,” says Parikh.

“You will notice that we played American music along with Indian music as a way to mix both cultures together.” 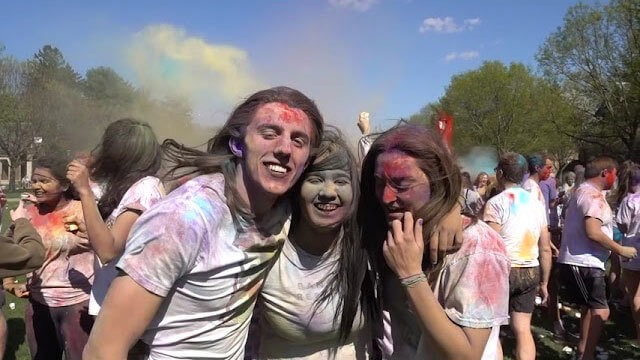 Sophomore Rhea Desouza helped organize the campus-wide event, but says nothing is quite like the real deal. She grew up in India and remembers celebrating the colorful holiday with friends.

“We would just run around and throw colors, then jump into a pool to wash off and do it all over again,” says Desouza. “This continued all day and at night people gather for a big meal around a bonfire.”

Even though she’s Catholic, she still experienced the colorful holiday and embraced the story behind the tradition. She says the celebration comes from various Hindu legends about two rival Hindu gods: Hiranyakashipu (evil) and Vinshnu (good). Hiranyakashipu’s son disagreed with his principles and decided to worship Vishnu instead. To get rid of his son, he turned to his evil sister Holika, who had the power of being immune to fire. Holika then tricked Hiranyakashipu’s son into sitting in a burning flame with her. But because of her evil intentions, her power became ineffective and she burned to death. The whole time in the fire, the son prayed to Vishnu and was saved because of his devotion. To this day, bonfires are held during Holi to symbolize the victory of good over evil.

Desouza says this is one of two major Hindu festivals celebrated on campus, as SASA also celebrates Diwali, the festival of lights and the Indian new year, on campus in early fall. She says these events are a great opportunity for students to immerse themselves in a different culture.

“It’s just a lot of fun,” she says. “You don’t need to have a background knowledge of this religion or culture – just show up and celebrate with us.”

International Student and Scholar Affairs (ISSA) was a sponsor of the event.

Originally published by Colleen Wilcox at issa.nd.edu on May 22, 2019.