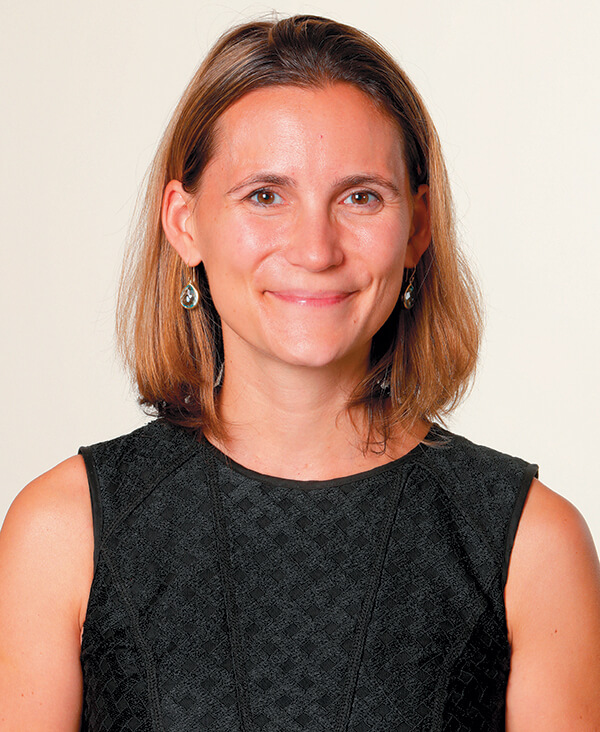 Growing up in South Bend, Carly Murphy ’01 always admired Marc Chagall’s Le Grand Cirque when she saw it in the Snite Museum of Art at Notre Dame.

This piece of art sparked a love of French culture in Murphy, who went on to major in French and art history in the College of Arts and Letters.

Now vice president of global client development at Sotheby’s international art auction house, Murphy returned to campus last semester to speak to a gathering of students, reflecting on her Notre Dame education and offering advice on entering the art world.

The title of Murphy’s presentation, “No Straight Lines,” highlighted her unexpected path to her current role. Every step along the way, she said, her liberal arts education has been a valuable asset.

“I do think that the education that I got at Notre Dame, and what I was exposed to, really made a difference,” Murphy said. “My people skills, my polish, my ability to stand on my own — to walk into a room with the top of the 1 percent and hold my ground — has really helped me.”

Initially, Murphy planned to pursue a Ph.D. in French, but her focus shifted while studying abroad in Angers, France. When she stumbled upon Chagall’s grave in the south of France, Murphy took it as a sign to study more art.

“It was one of those nerdy epiphanies that I should be studying more Chagall,” she said. “I was in France, so I spent the rest of my year traveling around Europe visiting sites where Chagall had artwork. I just fell in love with art, and it was a great place to do so.”

Murphy came back to campus and immediately declared her art history major. She also secured a job at the Snite giving tours in English and French, which opened her eyes to new types of art.

After completing a master of arts in French at Notre Dame in 2002, Murphy applied for a nine-month graduate course at Sotheby’s. The program was a great learning experience, with notable guest lecturers, classes at the Metropolitan Museum of Art, and travel experiences to museums across the country.

But that training alone did not land Murphy a full-time job at Sotheby’s in 2003. With a resume chock-full of impressive experiences in the art world, it was Murphy’s violin background that helped her get her foot in the door.

She started working in the musical instruments department, where she traveled with violins worth millions of dollars and delivered them to musicians and museums.

“Accentuate your uniqueness. We all have something that will speak to somebody on the other side,” Murphy said. “Your resume is a place where you can put something that really speaks to who you are.”

“Accentuate your uniqueness. We all have something that will speak to somebody on the other side. Your resume is a place where you can put something that really speaks to who you are.”

One day, Murphy was flipping through a Sotheby’s catalog when she saw that her beloved Chagall painting, the very piece that inspired her to study art so many years ago, had been sold. Chagall was hugely influential in Murphy’s life, his art often acting as signposts throughout her journey.

So when a friend from the shipping department at Sotheby’s called her to come down to the docks, Murphy went running.

“And there was my painting in a crate before they sealed it up,” she said. “They said, ‘We just thought you’d want to say goodbye.’ How serendipitous that it came through Sotheby’s doors.”

While Murphy will most likely never see Le Grand Cirque in person again, her final sign was less a call to explore a new direction than a confirmation of the path she was already taking.

In 2008, Murphy moved on to client development at Sotheby’s. She considers herself an “art spy,” undertaking all of the business intelligence to help support the client service team.

“It is so much fun. It is the perfect fit for me,” Murphy said. “I love doing all of the research, the intel, learning all of these things about people.”

Murphy’s journey may be unique to her, but the things she’s learned in the art world can relate to anyone. She especially encouraged students to accentuate their uniqueness and treat every experience as an opportunity to learn.

And she had one more piece of advice.

“Lean on the Notre Dame network,” Murphy said. “It’s great to see such an interest, which has grown since I was here. We could definitely use some more Notre Dame grads in the art world.”

“Lean on the Notre Dame network. It’s great to see such an interest, which has grown since I was here. We could definitely use some more Notre Dame grads in the art world.”

Originally published by Teagan Dillon at al.nd.edu on January 31, 2018.