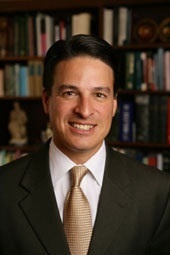 Under the terms of a new agreement between the University of Notre Dame and Ecuador’s Constitutional Court, Kellogg Institute Director Paolo Carozza is in Quito this week providing Ecuadorian justices with a foundation in procedural and theoretical aspects of precedent-based law.

Following the enactment of a new national constitution in 2008, the Ecuadorian Court has been developing new methods of adjudication. As it does so, justices are interested in learning more about practices in other countries, including the United States.

“It is a really dynamic time for constitutionality in Latin America,” says Carozza. “There is a great deal of ferment and experimentation. This is a wonderful opportunity to contribute to what is going on as well as an opportunity to learn from the Ecuadorian process.”

The intensive week-long seminar, cotaught by Professor of Law Amy Barrett, touches upon a broad range of issues, from the organization of the court’s docket and drafting of judgments to theories of constitutional interpretation and the handling of precedents. In addition, Carozza is offering a comparative analysis of other foreign courts, examining the rationale and procedures for citing these courts in judgments, as well as a lecture on issues of human dignity.

Of particular value to Ecuador’s Court, the seminar is also examining the ways that other jurisdictions handle freedom of expression cases.

The first stage of an anticipated long-term relationship between the Notre Dame Law School and the Ecuadorian Court, the seminar is cosponsored by the Center for Civil and Human Rights and the Program on Constitutional Structure. It is being held at CIESPAL, the Center for Advanced Studies in Communication for Latin America.