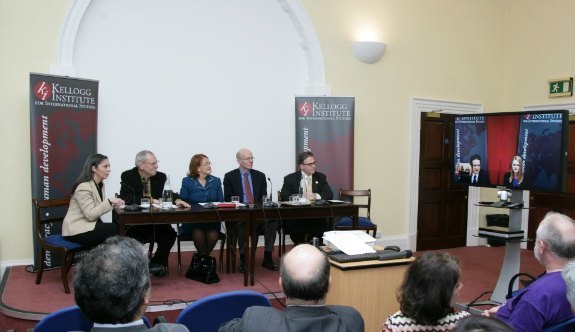 Organized by Latin America experts Scott Mainwaring and Gabriela Ippolito-O’Donnell of the Kellogg Institute for International Studies, the event took place at the University of Notre Dame Global Gateway in London, with a teleconference link to the Notre Dame campus.

“We are celebrating a founding moment today,” said Ambassador Castro, describing the December 10, 1983 swearing in of Argentina’s first democratically elected president after military rule and the truth commission, the world’s first, that followed. “The fight against impunity represents the collective effort of our people.”

“Human rights internationally and the fate of democracy in Argentina have been inextricably linked,” said Kellogg Institute Director Paolo Carozza, a former member of the Inter-American Commission on Human Rights. Today’s international human rights agenda and institutions, he said, have their origins in Argentina’s struggle against military dictatorship and for democracy and transitional justice.

Political scientist Philippe Schmitter of the European University Institute, who with Kellogg Institute founding director Guillermo O’Donnell wrote the landmark Transitions from Authoritarian Rule/Prospects for Democracy (1986), remarked that democracy in Latin America had been far more stable than O’Donnell and he could have imagined in the early 1980s.

“It is important to think of democracy as a process, not an event,” he said.

According to Mainwaring, “it is nothing short of remarkable that Argentina has preserved democracy over 30 years.” Calling the country a very “uncertain democracy” in 1983, he noted the “formidable” challenges facing the country, including weak democratic institutions, an authoritarian political culture, and an unrepentant and still powerful military.

“We envisioned this event as a celebration but as importantly as an open dialogue to assess the achievements and still pending tasks of democracy in Argentina,” said Ippolito-O’Donnell, who moderated the roundtable.

“Democracy in Argentina: Thirty Years After the Transition” was cosponsored with the Latin American Centre, University of Oxford; the Embassy of Argentina, London; and UCL Institute of the Americas. More than 100 people attended the sessions in London and at Notre Dame, with 60 more taking part via livestream.