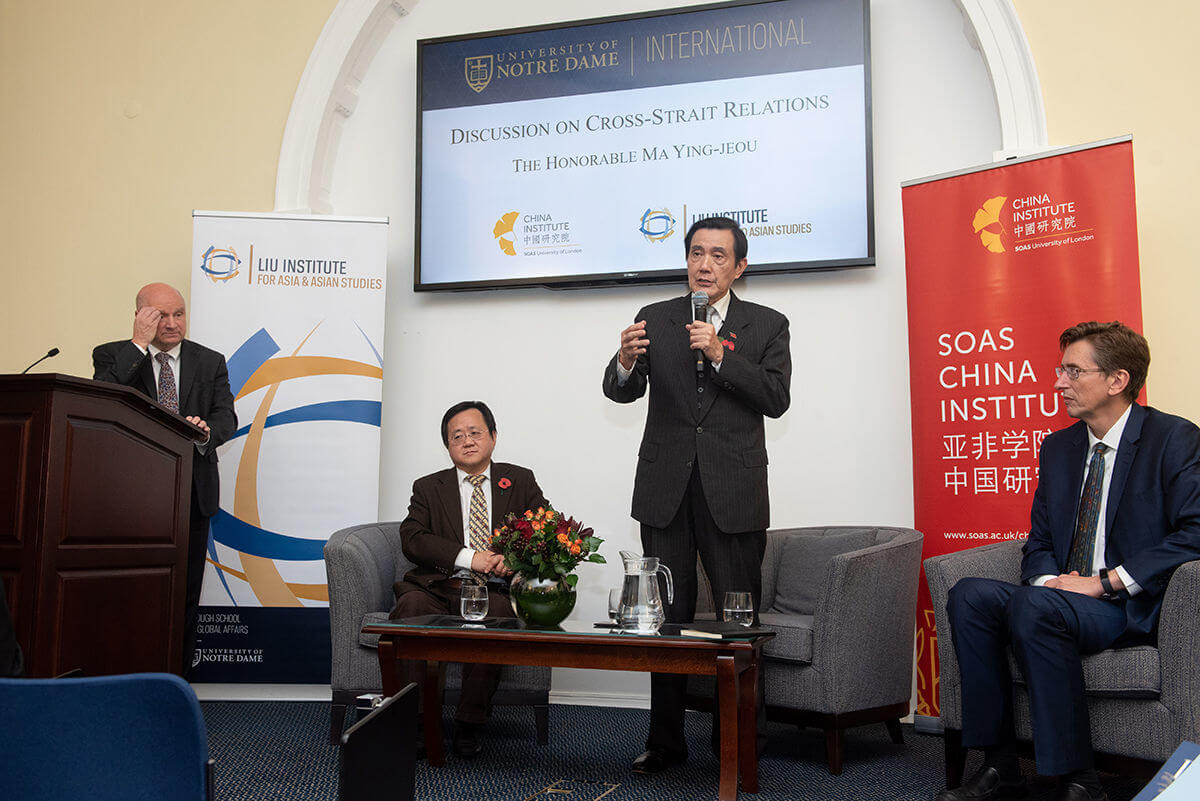 The honorable Ma Ying-jeou, who served as President of the Republic of China from 2008 to 2016, spent last Wednesday (Oct. 30) at the University of Notre Dame London Global Gateway. After spending time with a small group of undergraduate and law students, Ma addressed a gathering of 100 people in an event organized by the Liu Institute for Asia and Asian Studies, supported by SOAS China Institute and Notre Dame International.

In his keynote address, “Cross-Strait Relations," Ma touched on the history between Mainland China and Taiwan. He also spoke about his time as President, and his contribution towards the progress of peaceful relations with mainland China.

During Ma’s time as President of Taiwan, there was a notable advancement in cross-strait relations, and Ma was involved in negotiating a remarkable amount of agreements with leaders in mainland.

“During my term of office the two sides have concluded 23 agreements which is really unprecedented,’’ said Ma. “From trade, agriculture, to science – almost everything.” 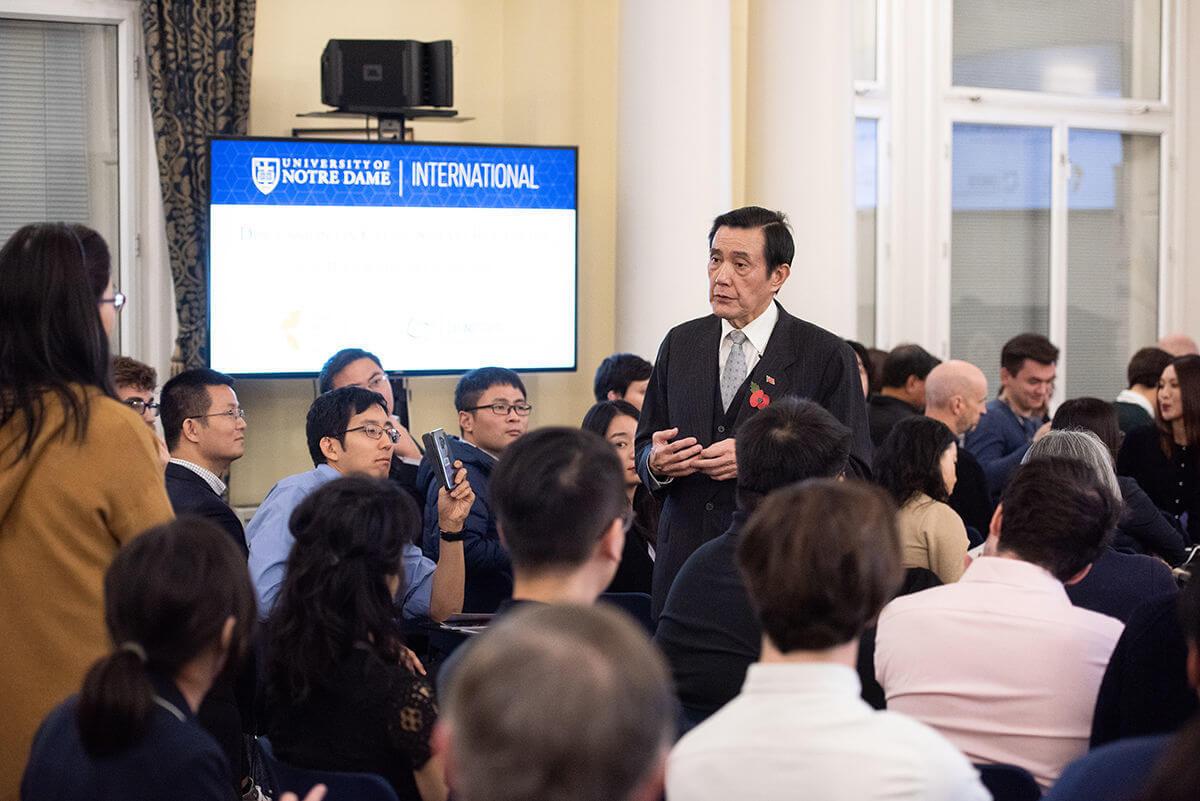 Ma’s role in the easing of tensions between Taiwan and mainland China is most notably marked by his meeting with Chinese president Xi Jinping in 2015. This meeting was historic as it was the first time a Taiwanese leader met with a leader from mainland China, since the two sides divided in 1949.

“The meeting was very important, as it showed the whole world that talks between the two sides through peaceful means is possible,” said Ma in his speech. “We also agreed that now we can establish a bridge across the Taiwan strait; a bridge of peace and prosperity.”

Michel Hockx, the director of the Liu Institute, was delighted that President Ma agreed to be the speaker for this inaugural Liu event at the London Global Gateway.

“London has such a wealth of political, financial, cultural, and historical links with Asia, not to mention a very large Asian community, all within a truly global context. It is the perfect place to organize Asia-focused events.”

Speaking about the collaboration with SOAS, Hockx said, “It was also a great pleasure to partner with the China Institute at SOAS University of London, the world’s only academic institution solely dedicated to the study of Asia, Africa, and the Middle East.”

Prior to his speech, Ma also spent time with a small group of Notre Dame law and undergraduate students who are studying at the London Global Gateway this semester. In the meeting, which took place at the Gateway, Ma engaged in a thoughtful and intellectual Q&A with the students. 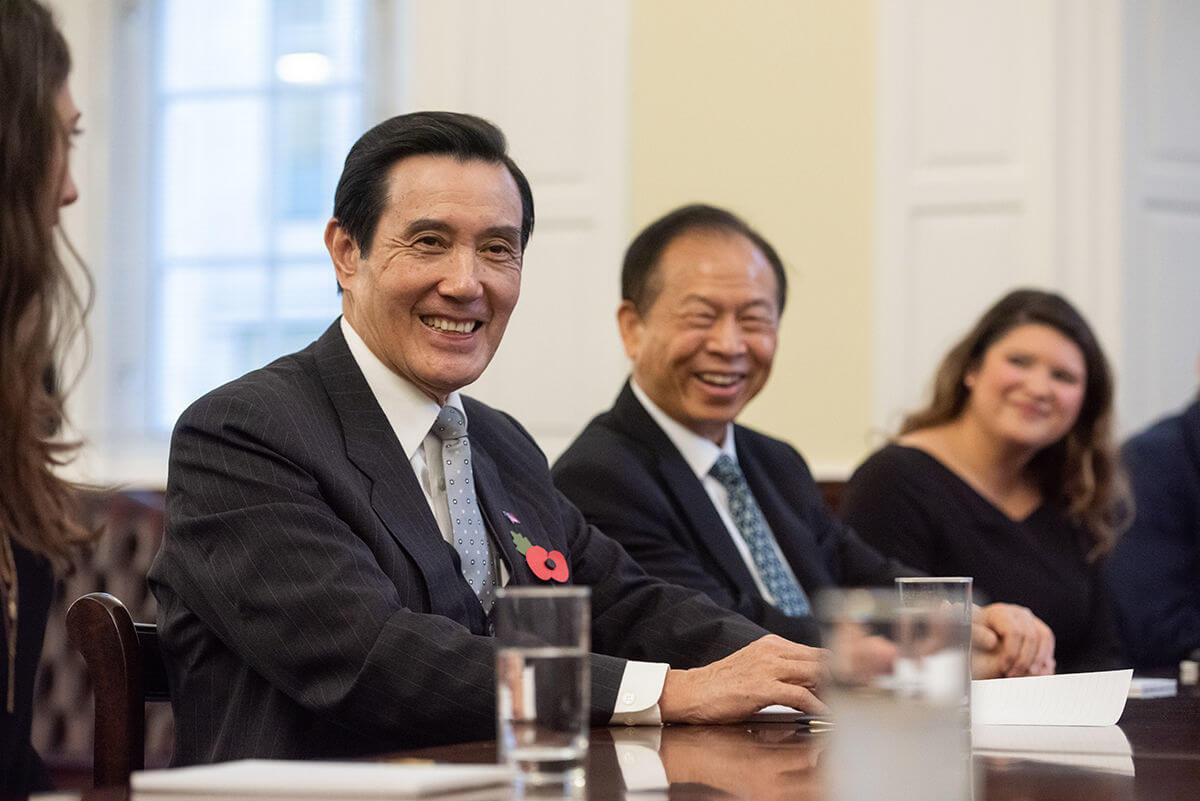 Ma’s visit to the London Global Gateway formed part of a larger set of meetings, where he met with staff and fellows at Notre Dame’s Rome Global Gateway, and spent time at Oxford University to address the Oxford Union. Notre Dame International supported the Liu Institute in making this series of events possible, and was excited to take part in such a prestigious event.

Originally published by Joanna Byrne at london.nd.edu on November 06, 2019.