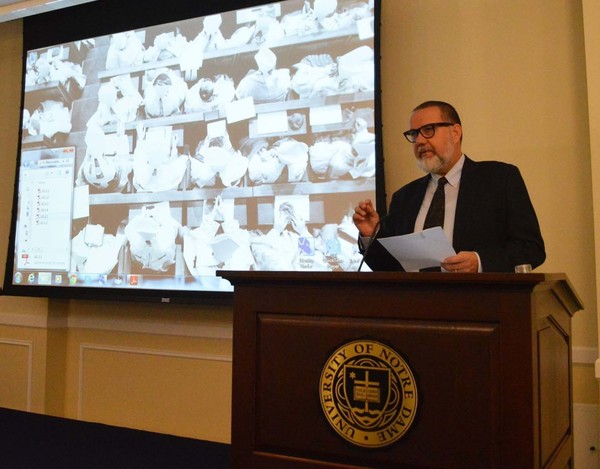 Scholars and students from the United States and Italy joined renowned Church historian Alberto Melloni in Rome on October 19th, 2015, for a lecture titled “The Language of reform and the reform of language of the Second Vatican Council (Il Vaticano II: Linguaggio di una riforma o riforma di un linguaggio),” in which Melloni explored the relationship of word choice to the reforms of the Second Vatican Council.

Melloni—professor of history of Christianity at the University of Modena and Reggio Emilia and director of the Foundation of Religious Sciences, John XXIII (Fondazione per le Scienze religiose Giovanni XXIII)—believes that language, or, more specifically, the reform of language not only marked but also propelled the transition of the Church. He discussed Pope John XXIII’s then-unconventional deployment of words such as “participate” and his characterization of the council as the banquet of grace, which he claims helped “translate ‘unity’ to a different dimension, that of the conviviality of grace, [which] meant changing completely the paradigm and opening the way to the crucial turning point.”

“We were delighted that Alberto Melloni came to deliver this lecture,” said Theodore J. Cachey, Jr., Inaugural Academic Director at the Rome Global Gateway. “Our goal at the Rome Global Gateway is to advance the University’s mission by creating meaningful connections between Notre Dame faculty and research centers and Italian research and cultural institutions. The Annual Lecture Series is just one way we foster such exchange.”

Melloni’s lecture, co-sponsored by the Foundation of Religious Sciences, John XXIII and Cushwa Center for the Study of American Catholicism, is the fourth of the 2015 Annual Lecture Series at the University of Notre Dame Rome Global Gateway. Launched in February 2015, the series brings together scholars from the U.S., Italy, and other nations to discuss and collaborate across disciplines.

“In hosting Professor Melloni, one of Italy’s most distinguished Church historians, the Rome Global Gateway has once again signaled its commitment to building relationships with Italian colleagues and to establishing a solid scholarly presence for Notre Dame in the Eternal City,” said Kathleen Cummings, director of Cushwa Center for the Study of American Catholicism. “Given that Vatican II's 'new moment' continues to unfold, the fact that the lecture commemorated the 50th anniversary of the closing of the Second Vatican Council suggests the Gateway can become an epicenter in Rome for important conversations about Catholicism.”

For more information on the Annual Lecture Series, please visit this page.

Notre Dame faculty interested in using the Gateway for academic events should visit this page for more information.