“I really do like the Emily Post thing,” she says. “When I was 5 years old, my mother signed me up for my very first etiquette classes — I’m from the South so it’s not as unusual as it sounds. I had to go in my little pink suit and, literally, white gloves to that.”

Wilson says that experience as a child might have set her trajectory very early on. After graduating from Notre Dame with a philosophy degree and a master’s in nonprofit administration, Wilson held a range of positions in which she developed her skills as a host and communicator. For the past eight years, she’s served in the Notre Dame International office, and is currently the University’s first-ever protocol officer, a role that allows her to use her skills in diplomacy.

As senior counselor and protocol officer, Wilson serves as the chief of staff for the vice president and associate provost for internationalization, Michael Pippenger, and leads project management of strategic NDI initiatives. She works with offices across campus on strategy and event management when distinguished international visitors come to campus, and assists when the University sends executive delegations overseas.

Wilson is a graduate of the Protocol School of Washington, the only accredited school of its kind in the U.S., and is licensed as an intercultural protocol and etiquette trainer and consultant. 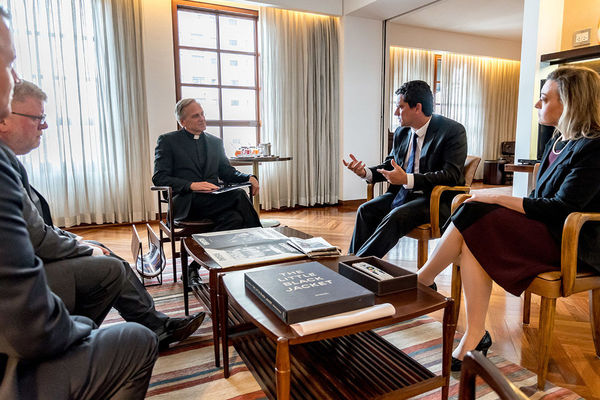 “Protocol officers started more in government and military areas, but it is growing for universities in the Protocol Officers Association,” Wilson says. Most of her classmates at the Protocol School were from the government or from global corporations such as Lockheed Martin and Coca-Cola, but she says there’s a small but growing number of protocol officers at
universities around the country.

“There are some smaller and larger universities that do similar work to what we do,” she says. That work includes bringing in partners from around the world and negotiating relationships with them to welcome students and support faculty research. 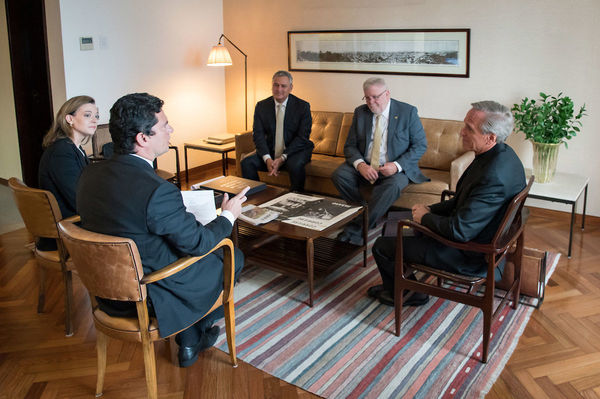 “You learn everything from how to do proper introductions of people and understanding the order of precedence — which is what the hierarchy is among those in the room, to how people should be seated to make sure that negotiations and meetings can go well between the cultures, to what flag etiquette might be,” Wilson says. “You don’t want to create an inadvertent disrespect by not addressing these things.”

Wilson’s role is an integral part of Notre Dame’s growing international focus. When international dignitaries visit campus, she makes sure everything goes smoothly.

“Lots of little details do make a difference,” she says. “When they’re done well, they’re in the background, and you’re not drawing attention by shuffling about or having people wondering where to sit. It makes everybody comfortable and then the most important things in the room can go well.”

While it can be hard to narrow down one favorite visit, she remembers fondly having the opportunity to work with colleagues across the University when Ban Ki-Moon, the eighth secretary-general of the United Nations, came to speak recently at the Liu Institute’s Asia Leadership Forum. But for Wilson, the most rewarding part of the job is helping to build the relationships between campus and its visitors.

“I think memorable moments are seeing our visitors interact with students, because they get to see what’s at the heart of Notre Dame and why we’re here and why we’re doing all of this work to build these relationships and make sure that people know about Notre Dame around the world,” she says. “They also get to meet with our faculty, who are so spectacular and are doing really great work. And then they go away with an idea of, OK, now I can see how my organization could contribute to that and that’s why their relationship is so key.

“We’ve been able to see that in a number of our visitors. They’ll go back and say, oh, this person in my organization should then talk to you about how we can support a conference or how we can support scholarships. It’s gratifying because there’s something that’s going to come out of this. It’s always great to have somebody come here and give a talk. But when there’s something meaningful that grows out of it, it feels even better.”

Wilson is available to consult with people across campus when they have international guests.

“My work can be anything as simple as putting a schedule together to doing research on a country and what we might need to know about them,” she says. “I have access to databases about everything from what gift courtesies might exist to what greetings would be between people, and I’ll put together information on that so that those involved with a visitor can study up before they meet with people.

“We’re always here to help with whatever the different units around the University might like us to support. Nobody’s required to lean on us for it, but we’re here to help and to offer whatever support they might like. It could be as little as giving you some background information to helping to take the visitor around when they’re here. I’m glad to be there for them on this.”

Wilson has enjoyed her role at Notre Dame International.

“This job at NDI looked like something new and an opportunity to learn, and it’s definitely been that. I got to help build the office here, which I loved doing,” she says. “I work with great people who are all really committed to everything that they do. You have to enjoy all the different personalities and the different things that we do with people around the world. It’s been a lot of fun.”

Originally published by Brittany Kaufman at ndworks.nd.edu on January 15, 2019.