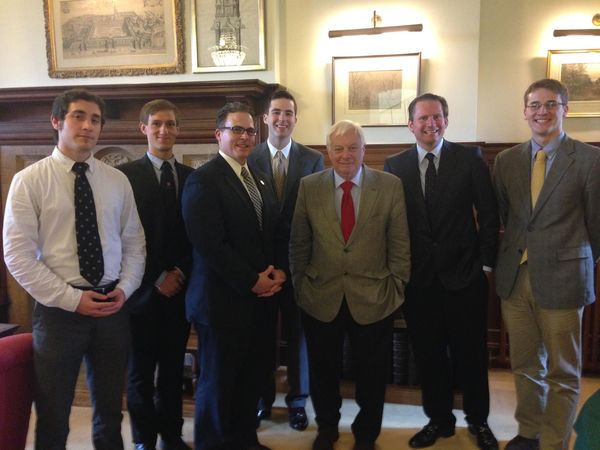 Four Notre Dame students currently studying at the University of Oxford were recently invited to meet Lord Patten of Barnes, chancellor of the University, alongside Warren von Eschenbach, assistant provost for Europe and director of the London Global Gateway, and Michael Hannigan, a Notre Dame alumnus (Arts and Letters and Law) who is pursuing a master’s degree in higher education at Oxford.
Patten has had an extensive career in politics and overseas affairs.  His previous roles include posts in the Conservative Research Department, Cabinet Office, and the Foreign and Commonwealth Office.  He was a Member of Parliament for Bath for more than ten years, and was the last governor of Hong Kong in the 1990s.  He also holds a seat in the House of Lords, is the chairman of the BBC Trust, an Honorary Fellow of several U.K. institutions, and an accomplished author.
During their afternoon tea, the group discussed Patten’s visit to Notre Dame’s South Bend campus in May 2015, where he was the commencement speaker and received an honorary doctorate from the University, and the upcoming papal visit to Philadelphia in September.  Patten and the students shared experiences of living and traveling abroad, and the chancellor recounted challenges and feats of governing Hong Kong until its transfer to the People’s Republic of China.
“It was a wonderful opportunity for our students not only to share their experiences studying at Oxford, but also to learn more about Lord Patten’s remarkable and distinguished career in public service,” commented von Eschenbach. “Lord Patten was a gracious and engaging host, and we look forward to continuing to strengthen the relationship between Oxford and Notre Dame.”