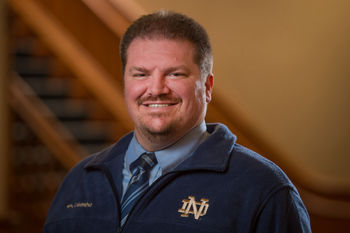 David Younger, Notre Dame International associate director of off-campus programs, was recently appointed chair of the Consular Affairs Liaison (CAL) committee in the NAFSA Association of International Educators. He will serve in this role for two years.

At Notre Dame, Younger’s work is focused on 10 undergraduate study abroad programs throughout Germany, Italy, and Russia. He assists in academic and cultural programming and direction; helps to create, evaluate, and promote programs; assists in determining course equivalency; and is involved with crisis, health, and safety management. As chair of CAL, Younger is responsible for advancing and monitoring the subcommittee’s activities and goals. He also serves as a member at large on the Education Abroad Regulatory Practice Committee.

“We are so proud that David is representing us at the national level on this important topic,” said Michael Pippenger, vice president and associate provost for internationalization.

Younger has served in various roles on the CAL committee for the last five years. From 2012–2014, he served as a liaison for Indiana, Kentucky, Michigan, and Ohio to the Italian consulate in Detroit. He was a country coordinator in the Italy group until October 2016, leading and managing over ten Italian CALs and serving as the top resource for Italian visa issues for U.S. students traveling to Italy. While in this role, he presented at international conferences and led international webinars through NAFSA.

Younger received his bachelor’s degree from Franciscan University of Steubenville and his master’s from Indiana University. He has traveled extensively throughout the world, and speaks Spanish, German, and Italian fluently. He is also a master bagpiper, best known for his football Friday recitals at the Morris Inn each fall.