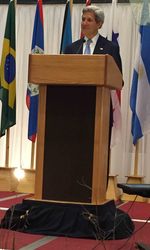 Notre Dame was among the universities invited to the inaugural Foro de Rectores de las Americas (Forum of University Presidents) on April 9-11, 2015, in Panama City. President John I. Jenkins, C.S.C., was unable to attend and Nick Entrikin, vice president and associate provost for internationalization, went in his stead.

New for 2015, the Forum is an initiative of the Seventh Summit of the Americas and attracted nearly 400 university and higher education leaders from 35 countries of the Americas. The Summit, held in Panama City April 10-11, is an institutionalized gathering of Western Hemisphere heads of state and government. The 2015 theme was “Prosperity with Equity: The Challenge of Cooperation in the Americas.” 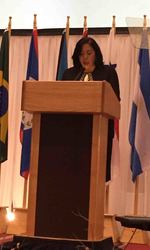 Juan Carlos Varela, President of Panama and the initiating force behind including university presidents in Summit of the Americas, opened the Forum with a welcome address. United States Secretary of State John Kerry delivered a lecture that underlined the Forum’s theme “Prosperity and Education” and Marcela Paredes de Vasquez, Panama’s Minister of Education, delivered remarks of thanks to Secretary Kerry.

“Representing Notre Dame at this gathering was a tremendous honor,” Entrikin said. “I had the opportunity to meet and exchange ideas with many colleagues from Latin American and Caribbean universities; the possibilities for new student programs and faculty exchanges in this key region are both plentiful and exciting.”