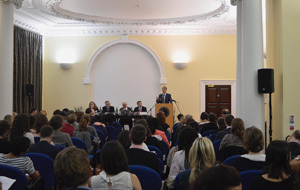 On May 14, in partnership with the London-based Business and Human Rights Resource Centre, Notre Dame Law School and the Center for Civil and Human Rights hosted a debate at the London Global Gateway on Does the World Need a Treaty on Business and Human Rights? Weighing the Pro’s and Con’s.
The controversial topic is currently a subject of sharp debate among governments and human rights advocates.  Three years ago the United Nations adopted non-binding Guiding Principles on business and human rights.  The UN set up a five-member Working Group to promote and monitor implementation of the Principles.
Not content with the Guiding Principles, Ecuador last year introduced a proposal to explore a legally binding UN treaty on business and human rights.  Ecuador’s proposal is formally supported by over 80 governments and over 150 non-governmental human rights groups.
Some human rights advocates either oppose Ecuador’s proposal, or have not yet decided whether to support it.  The British government publicly opposes it, calling instead for greater efforts to implement the Guiding Principles.  The US has not taken a public position.
The purpose of the May 14 program was to air and analyze the contrasting positions.  The program began in the afternoon with a private, three-hour Roundtable of 25 experts, chaired by Notre Dame Law Professor Doug Cassel.  Professor Roger Alford, Associate Dean for International and Graduate Programs, as well as Business and Human Rights Resource Centre Executive Director Phil Bloomer and Deputy Director Mauricio Lazala, were among participating experts from academia, law firms, bar associations, human rights groups, and the UK government.  (For a list of Roundtable participants, please see attachment below). 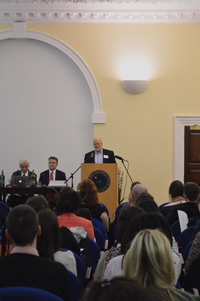 That evening Professor Geoffrey Bennett, Notre Dame’s London Law Director, welcomed 130 attendees to the public program in a packed Trafalgar Hall.  (For program and speaker bio’s, please see attachment below) . Phil Bloomer served as moderator (“chair” in the English terminology).  Professor Cassel introduced the topic (for his remarks, please see attachment below).
The main arguments for a treaty were presented by Professor Chip Pitts of Stanford Law School.  The principal skeptic was Chris Esdaile of the London law firm of Leigh Day, the leading British firm bringing tort suits against companies for human rights violations.  Professors Sheldon Leader of Essex University, and Nadia Bernaz of Middlesex, provided commentary.
Before the floor was opened to questions from the audience, Professor Michael Addo of the University of Exeter gave his reflections.  As a member of the United Nations Working Group on business and human rights, Professor Addo is well-positioned to ensure that the points made in the debate reach UN policy circles.
The informational and analytical quality of the debate received enthusiastic reviews by attendees and participants.  A videotape of the evening program will shortly be posted on this web site.   This was the first in a series of programs that Notre Dame Law School and the Business and Human Rights Resource Centre hope to organize at the London Global Gateway.
May 14 Roundtable Participants PDF
May 14 Program and Speaker Bios PDF
May 14 Professor Cassel's Remarks PDF
- Reported by Doug Cassel
Contact: Emily Grassby, Communications and Planning Specialist for London Global Gateway, egrassby@nd.edu
Images ©University of Notre Dame London Global Gateway