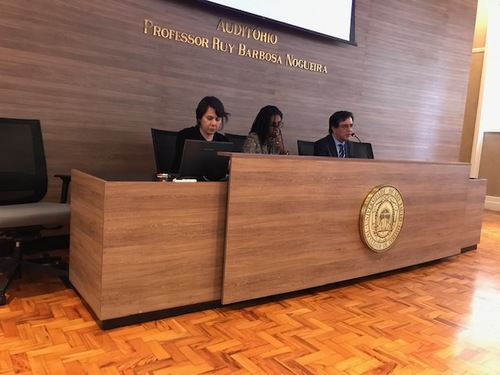 Freedom of speech is a relatively new concept in Brazil, guaranteed in the 1988 constitution after years of dictatorship. But it’s under attack in the country, mirroring an erosion throughout the rest of the world, according to journalists, human rights advocates and legal scholars who gathered Nov. 8 for the “The Use of Violence to Suppress Freedom of Speech and Impede Democracy Symposium.”

Sponsored by the University of Notre Dame, Notre Dame, Indiana, and the University of São Paulo, the symposium was convened in São Paulo to examine attacks on freedom of expression in the country’s current climate of political polarization, and with the rampant dissemination of misinformation - primarily through social media.

“We’re not living in trivial times. We’re seeing a regression in democracy, liberal democracies around the world … and an increase in resistance against minorities, human rights and freedom of speech,” said Dr. Alberto do Amaral, USP professor of international law who opened the conference. “If there is no freedom of speech, there is no political discourse. But there’s an intolerance in Brazil. We want to silence voices with which we don’t agree.”

Panelists addressed attacks on journalists and human rights and environmental activists in Brazil, where the rates of violence against all three groups are among the highest in the world. Brazil is second in the world for numbers of journalists killed outside of combat. A report this year from Global Witness said 57 environmental and land defenders, many in the Amazon, were killed in 2017, the most lethal year on record.

Concerns have grown with the election in October of Jair Bolsonaro as Brazil’s next president. He is a defender of the country’s 1964-1985 dictatorship and has said during the campaign that he would “put an end to all of Brazil’s activism,” raising concerns among a large band of civil society groups. He has also spoken about loosening environmental laws protecting the Amazon and opposes indigenous rights to the land.

But panelists stressed that silencing critics is not just the domain of Bolsonaro and his supporters.

“Everyone likes to attack journalists. That’s what we see today … there is no ideological bent to these attacks,” said panelist Janaina Garcia, a founder of Journalists Against Harassment, which focuses particularly on attacks against women journalists. “Even if we don’t agree with what’s said, we have to defend the right to say it.”

There were 153 cases of harassment of journalists during the recent presidential campaign, said panelist Marina Iemini Atoji, executive director of the Brazilian Association of Investigative Journalists who helped organize the event. Eighty-two of the incidents were online, meaning reporters were hacked and/or threatened via social media for critical reporting on the campaigns.

The symposium represents a new and growing partnership between Notre Dame and USP as part of Notre Dame’s effort to build its presence in the ninth-largest economy and the world’s largest Catholic country. It started last year with a conference between the two universities’ law schools on corruption and rule of law, as well as the awarding of the 2017 Notre Dame Award to former Brazilian Judge Sergio Moro for fighting corruption and jailing politicians and business leaders in a massive kickback scandal known as “Operation Car Wash.” Moro has recently agreed to be justice and public security minister under Bolsonaro.

Many panelists agreed that the hope of sustaining free speech as it comes under attack from critics and purveyors of misinformation lies with Brazilian institutions.

Marcelo Sodré, law professor with the Pontifical Catholic University of São Paulo, closed the session by saying that the courts play a key role going forward, as justices until now have been reluctant to define free speech in the country.

“Humans rights, especially the right to freedom of speech, not only involves institutional victories but constitutional victories. From these victories, we can reverse anything, convert them to real achievements and spread the culture of free speech,” he said. “We have to be used to dealing with people who think differently from us. We have to live together without resorting to oppressive violence.”

The symposium was supported and organized by the Sao Paulo Global Center.

Originally published by Katherine Corcoran at saopaulo.nd.edu on November 20, 2018.