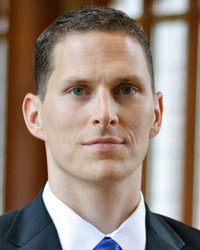 Geoffrey Bennett, who directed the London Law Program for 22 years, will retire at the end of 2016. The search for a permanent London Law Program Director is ongoing, overseen by Kozel, with the successful candidate scheduled to begin next fall.

Randy Kozel is well acquainted with the London Law Center, having served as a visiting professor in 2013. As a director of the Notre Dame Program on Constitutional Structure, Kozel has also participated in its annual roundtable conference in London for several years.

Randy Kozel joined the Law School faculty in 2011 and was named ‘Distinguished Teacher of the Year’ by the Class of 2014. He teaches and researches in fields including constitutional law, federal courts, information privacy, and contract law, with a particular focus on the role of precedent in legal decision making.