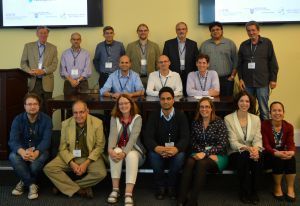 A group of leading historians of medicine, science and the law from around the world gathered on July 24-25, 2015, at the London Global Gateway, to discuss and examine the topical issue of forensic science and medicine in a global and historical context.
Ian Burney and Neil Pemberton—both from the University of Manchester’s Centre for the History of Science, Technology and Medicine—organized the conference with Christopher Hamlin, professor of history at Notre Dame.  It was the third conference in a series addressing forensic science and medicine, and was co-sponsored by Notre Dame’s Institute for Scholarship in the Liberal Arts (ISLA), College of Arts and Letters, and John J. Reilly Center, as well as CHSTM and the Wellcome Trust.
“The conference grew out of a previous meeting that Neil Pemberton and I hosted at the University of Manchester in June 2010. The conference was titled Forensic Cultures, and it brought together an interdisciplinary group of lawyers, sociologists, historians, film and museum studies scholars, forensic practitioners, and forensic TV writers to explore the remarkable resonance of forensics in modern culture,” said Burney. “We continued our discussions on this, and decided to convene a Forensics II to pursue these questions with a new group of scholars, this time all historians, working on a global forensic stage. We decided to focus on the importance of location (temporal and spatial) to the production and enactment of different forms of forensic knowledge.”
During the conference, 17 multidisciplinary speakers from universities around the globe presented papers that called into question what we now recognize as an infallible and unobjectionable science, considering how its role in society, acceptance as a science, and credibility depended on time, place, and cultural identities and unease, relating in particular to the British Empire and colonialism. 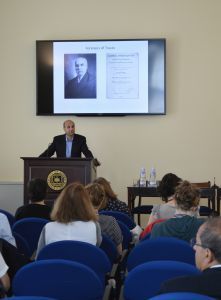 The themes of the first day were detection, tracking, and tracing.  The speakers considered the origins, development, and role of techniques such as forensic graphology, metric photography, blood testing and differentiation, blood spatter analysis, and tracking, and how they revolutionized crime investigations, and disproved false accusations and convictions.
The second day dealt with issues of the changing roles of forensic pathologists, crime scene investigation and its ascendancy to the status of essential practice, the sharing of knowledge between forensic networks within the British Empire, poisonings and toxicology coming to the fore in crimes and the courtroom, the introduction of “scientific” policing methods in Europe, reforms in the forensic field in China, and practicing legal medicine.
“London was a geographical mid-point for us to draw scholars in from Asia, the Middle East, Europe, and North America. London is also a draw in itself: many of the participants’ work is based on British archival material, and coming to London enabled them to do a bit of research before and after the conference. The other major advantage was the conference facility and support,” said Burney.  “One of the main aims of the conference was to establish a global network of scholars, from a variety of career stages, to further stimulate scholarship in the area, and help those already working in the area to discover one another. At the final post-mortem session everyone committed themselves to developing this network, and we already have plans for our next meeting!”