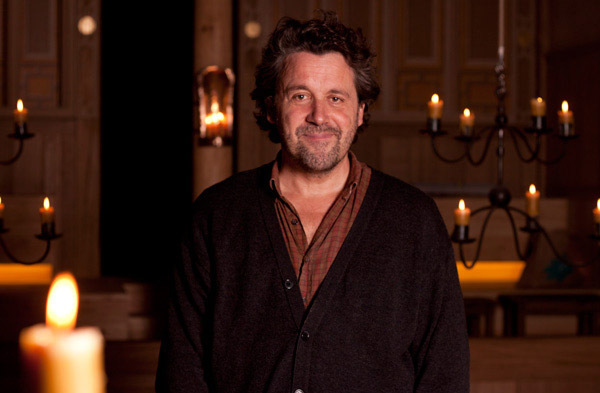 On March 23, 2015, the London Global Gateway will host the fourth Notre Dame Annual Shakespeare Lecture in honor of Stanley Wells.  The 2015 speaker is Dominic Dromgoole, artistic director of Shakespeare’s Globe.  In his lecture entitled Shakespeare on the Road, Dromgoole will recount personal experiences of his work and his impressions of Shakespeare’s reception around the world, based on the worldwide Globe to Globe Hamlet Tour.  This remarkable undertaking was initiated and co-directed by Dromgoole, and follows on from the hugely successful 2012 Globe to Globe festival, during which, over a period of six weeks, 37 international theatre companies performed works of Shakespeare in their own language.
“This tour has already experienced such a huge amount of variety: its performance in Kiev on the night before their recent elections when the entire incoming political class – Poroshenko, Klitschko and the heroes of the Maidan square revolution – all turned up to watch; being the first company to play at the United Nations in New York when we performed to a hundred ambassadors arrayed behind desks in the ECOSOC chamber; its joyous reception in the beautiful old theatres of the capital cities of South America, when riot police were called out to control the crowds who could not get in; its tougher but more rewarding journey through Africa, where amongst many other highlights, we were the first play of any sort to perform in Somaliland for more than twenty years since their independence,” said Dromgoole.
In almost ten years as artistic director, Dromgoole has expanded and diversified the Globe’s works, producing more than twenty hugely successful new plays.  Under his leadership, an indoor, year-round theatre, the Sam Wanamaker Playhouse, was opened, and the Globe was the first theatre to introduce its own Video On Demand service, Globe Player.
This Notre Dame lecture falls between two significant anniversaries: the 2014 celebrations of 450 years since Shakespeare’s birth and the 400th anniversary of his death in 2016.  Boika Sokolova, professor of Shakespeare studies at the London Global Gateway, said, “The Shakespeare lecture has become a highlight of the academic year – a high-visibility platform for distinguished scholars and theatre practitioners to address Notre Dame students and staff, and the wider scholarly and artistic community.  It is one of the many ways the London Global Gateway integrates with the rich intellectual and cultural life of London.”
Image: Dominic Dromgoole (Artistic Director) in the Sam Wanamaker Playhouse, Shakespeare's Globe by photographer Helena Miscioscia.