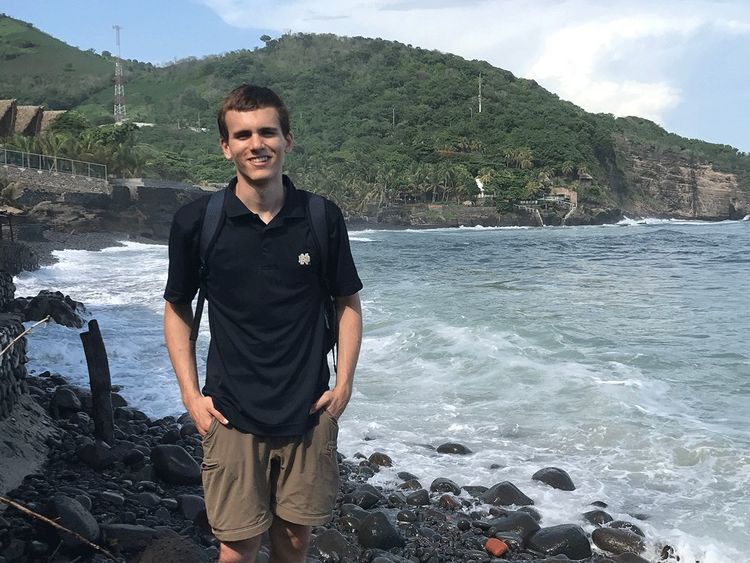 Andrew Grose stands near the Pacific Ocean in La Libertad, in the southwest El Salvador

In summer 2016, Notre Dame senior Andrew Grose studied abroad in Spain — taking a headfirst dive into a language and culture he loved and had studied for years.

The experience confirmed for him that whatever path he takes after graduation, Spanish will be a part of it.

“In learning how to speak Spanish, I’ve learned how to create trust and understanding with others,” he said. “Putting the effort into memorizing words, forming sounds, and constructing conversations in another language pays off when we get the chance to communicate with people who offer something exciting for us to learn.

“In whatever career I intend — medicine, anthropology, or something else — making connections through Spanish will be key to truly understanding and sharing the best I have to offer with the people I work with.”

“In whatever career I intend — medicine, anthropology, or something else — making connections through Spanish will be key to truly understanding and sharing the best I have to offer with the people I work with.”

Grose, a Spanish and preprofessional studies major, is planning a career in medicine and knows his language skills will be a valuable asset — a fact that was underscored in a course on Latin America he took last fall.

The class, led by Associate Professor Marisel Moreno, included discussions on the history and culture of the region, as well as why people from Latin American countries come to the United States and their experiences here. 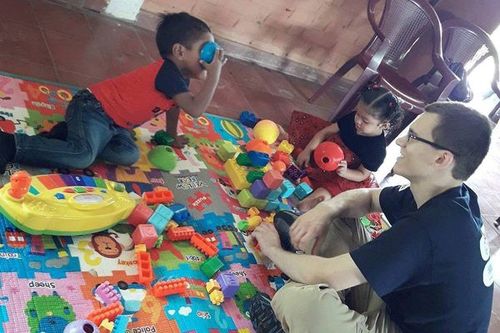 “Andrew demonstrated not only a deep curiosity about the class material, but also a sense of responsibility and commitment to the local Latino/a community,” Moreno said. “I know that this course opened his eyes about the history of Latin America-U.S. relations, and this newfound passion has had a profound impact in his intellectual and professional development.”

“I had not known much about the Latino population in the U.S. beforehand,” Grose said. “As citizens of the United States, we are generally not well educated about Latin America. That’s surprising, since we have such a complex history with Latin America.”

This summer, Grose combined his passions in his work for FUSAL, a social services nonprofit in El Salvador, through the Center for Social Concerns’ International Summer Service Learning Program.

In one of the poorest regions of the country, long wracked by violence, Grose spent two months logging the height and weight of pregnant women and their children as part of a larger effort to improve their nutrition.

The organization also assesses children’s gross motor skills, distributes vitamins and shoes, and gives cooking classes to help people get the most out of the sometimes scant food supply they have.

“The work they do in communities inspires people there to build their own culture of health,” Grose said. “It’s a very sustainable health care model that takes a long time to develop, but the results speak for themselves.” 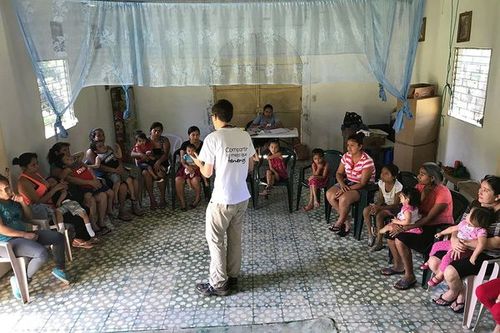 Grose plans to return to El Salvador after graduation to conduct research on community mental health. He’s seen how the region is still struggling with the lasting effects of the Salvadoran civil war — which lasted from 1979 to 1992 — and mental health issues that may be related to it. He hopes to shadow mental health care providers and collect opinions and testimonies from residents in order to recommend courses of action for mental health and human rights organizations to take.

A significant reason he has been able to find his niche, he said, is that Notre Dame has helped him explore knowledge on many fronts.

“The University has allowed me the time I’ve needed to decide what I’m interested in and the opportunities to get involved,” Grose said. “I think that’s unique to a Notre Dame undergraduate education.”

Thomas Anderson, professor of Spanish and chair of the Department of Romance Languages and Literatures, expects that Grose will make the most of his experiences this summer and going forward.

“He’s clearly very serious and someone I am certain will do something really positive in El Salvador,” Anderson said. “He shows the type of determination you see in the best students at Notre Dame.”