In recent years Italy, along with many other European countries, has witnessed a large migration flow from countries struggling with poverty, violence, and war. We have all asked ourselves how such atrocities are possible. What makes refugees leave their homes? And, most of all, how can we help?

During their study abroad year in Rome, students have the chance to ask these questions directly, learning more about the refugee situation in Italy and throughout Europe through community-based learning activities and the Rome Global Gateway collaboration with refugee centers in Rome. Here, we focus on the experience of students who volunteer at the Joel Nafuma Refugee Center (JNRC).

Eva Baghdan, a third-year student in the School of Architecture’s Rome Program, is working as an English tutor for a refugee from Iran named Habib. Habib is very hard working and determined to learn English to become an English teacher. Eva helps him with his grammar, conversation, and reading. “I absolutely love it. It's always a fun time. Habib and I sit together for an hour and spend the time answering any questions that he has. He has so many that sometimes we spend the entire time defining and explaining new words and phrases that he comes across when he is studying. Though I have tutored in the past, this experience for me is completely different,” Eva says. “I really look forward to every meeting. Not only was I able to help out Habib, but I was able to learn so much about him and about his ambitions. He really wants to be an English teacher, and he works very hard to accomplish this.” 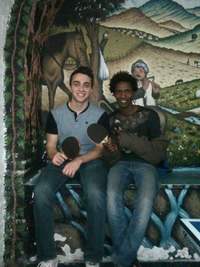 Nicholas Courtney and Bah at JNRC

Nicholas Courtney, an accounting and applied math major from Buffalo, spends a few hours every week at the JNRC talking to some of the refugees who spend their afternoons there, chatting about family, school, work, politics, and their opinions on Italy and the United States. About his experience Nick says: “I enjoy bringing friends from school to meet refugees at the JNRC and help break down stereotypes. It's fascinating to learn how people from around the world view the United States, practice religion, and experience Italian culture, as their experience of Rome is much different than mine. The JNRC has offered an amazing opportunity to further understand this overlooked population in Rome and taught me firsthand lessons about Italian society and global politics."

During his time in Rome Nick also took some time to visit the Ritsona refugee camp located in a rural area outside of Chalcis, Greece, where he had previously spent his summer research project to study the refugee integration and the asylum processes in Europe. Eileen Madigan, a mechanical engineering student from Chicago currently studying abroad in Rome, decided to join him to experience firsthand perspectives on such an important contemporary issue.

Ritsona houses roughly 800 refugees, largely from Syria and Iraq, who have been waiting idly to navigate the overwhelmed Greek asylum system, unable to work or go to school until their applications are processed. Because they’ve already been registered as arriving in Greece, these people cannot work or go to school elsewhere in Europe unless another country agrees to resettle them.

The refugees of Ritsona previously lived in tents provided by the United Nations High Commission for Refugees (UNHCR), where they endured heat waves, fought off mosquito infestations, and shared a handful of Porta-Potties and showers for the whole camp. Since Nick’s last visit, they have moved into “Iso-Boxes,” metal crates with enough room for a few bunkbeds, small living area, and bathroom. Other than the food delivered 3 times a day by Greek soldiers, the administration and organization of the camp is entirely run by independent non-profits.

Nick says, “My honest reaction to the conditions in the camp when I first arrived last summer was that things weren’t as bad as some of the horror stories I’d read about in the news. The refugees had tents over their heads, basic food and water was provided, and there were no riots. Not only were the refugees not rioting, but they were actually quite friendly. Though the living conditions are less than desirable, the idleness and uncertainty is perhaps the worst part of life in the refugee camp. They do not know how long it will be until their applications are processed or where they will go next. Humans often yearn for a purpose in life, and many of the refugees I met felt their lives in the camp lacked a clear mission. This mental and psychological struggle was explained quite bluntly in a Syrian man’s desire to return to the warfare he left behind in Syria rather than stay in the camp. He said, ‘In Syria we die quickly. Here we die slowly.’” 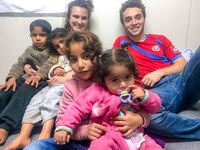 Nick, Eileen and the kids at the Ritsona refugee camp

“We witnessed extreme poverty but also extreme generosity and joy,” adds Eileen. “I was moved by their hopelessness as well as their wish to return home even if that meant death, only to be reunited with their families. We are a creative and cultured generation, and we are the ones who will be able to incite change. I believe young people like me should make a better use of their time, deciding to spend it being more useful and productive and to act in order to erase prejudices.”

During their short but very intense stay with their new friends, Nick and Eileen had the chance to see the human faces beyond the headlines, discovering similarities between them in spite of the very different opportunities and lives.

Playing soccer in the camp

“Despite all the ways the refugees in the camp were different than me—the atrocities they’d experienced, the family members they’d lost, the idleness and uncertainty they faced daily—I couldn’t help but notice how similar we were,” Nick affirms. “I met a group of guys, all between 19 and 21, and as we sat around joking, playing soccer, and talking about sports, music, and current events, I couldn’t help but feel as if I was right back talking to my buddies at Notre Dame. In those moments, they didn’t seem like refugees, foreigners, terrorists, or threats to Western civilization. They were George, Bassam, Farhad, and Ebrahim. They were my friends. Our striking similarities force me to consider what I would do if I were in their shoes. If my country were being ripped apart by terrorist groups, rebel armies, my own government, and foreign troops, wouldn’t I flee too?"