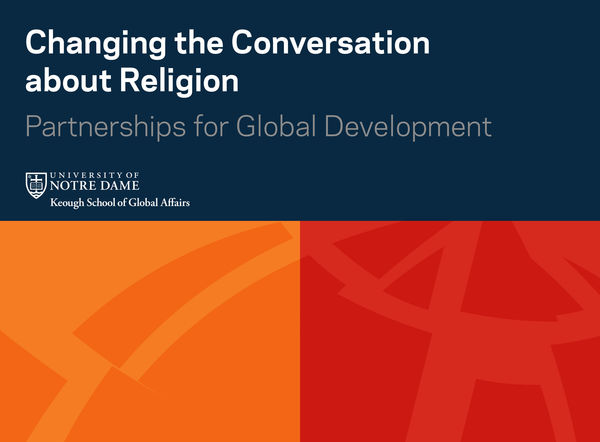 At a public symposium in London on Friday, Nov. 13, leading global thinkers will consider how a deeper engagement with religion and religious communities can enhance economic growth, political stability, conflict resolution, and peace.

All are welcome to Changing the Conversation about Religion: Partnerships for Global Development, organized by the University of Notre Dame’s new Keough School of Global Affairs and Notre Dame’s London Global Gateway. The symposium will be held November 13 (Friday) at 2:30 p.m. (GMT), One Whitehall Place at the Royal Horseguards Hotel. The symposium is free and open to the public. Register.

Panelists from academia, international development, and government affairs will address a wide range of issues, including:  the roots of religious extremism in groups like ISIS and Boko Haram, the potential of religions for advancing the UN Sustainable Development Goals, the obstacles to religious engagement presented by political leaders and government corruption, and the ways in which religious and secular people and societies can mobilize to improve education, deliver health care, protect the environment, and advance economic development and justice.

“Religion is often overlooked in statecraft, policymaking, and economic development, yet the majority of the world’s peoples identify as religious and live in religiously influenced communities and societies,” says Appleby, whose research, writing and teaching focus on the powerful role of religion in world affairs. “Decades of research have shown that religions have a significant impact on how people and communities make fundamental decisions about money, family, politics, war and peace.

“For better or for worse, religiously inspired movements and organizations, as well as traditional churches, mosques, synagogues and temples, are major players in local, national and geo-politics. We can no longer fail to give them sufficient weight in our analysis, engagements, and policymaking.”

R. Scott Appleby is the founding dean of the new Keough School of Global Affairs at the University of Notre Dame. An historian and a fellow of the American Academy of Arts and Sciences, his teaching, research and writing focus on the powerful role of religion in world affairs.

Ebrahim Moosa is Professor of Islamic Studies at Notre Dame. His interests span both classical and modern Islamic thought with a special focus on Islamic law, history, ethics and theology.

Atalia Omer is Associate Professor of Religion, Conflict and Peace Studies at the University of Notre Dame. Her research interests include the interrelation between religion, nationalism, and peacebuilding and the role of national/religious/ethnic diasporas in conflict transformation and peace.