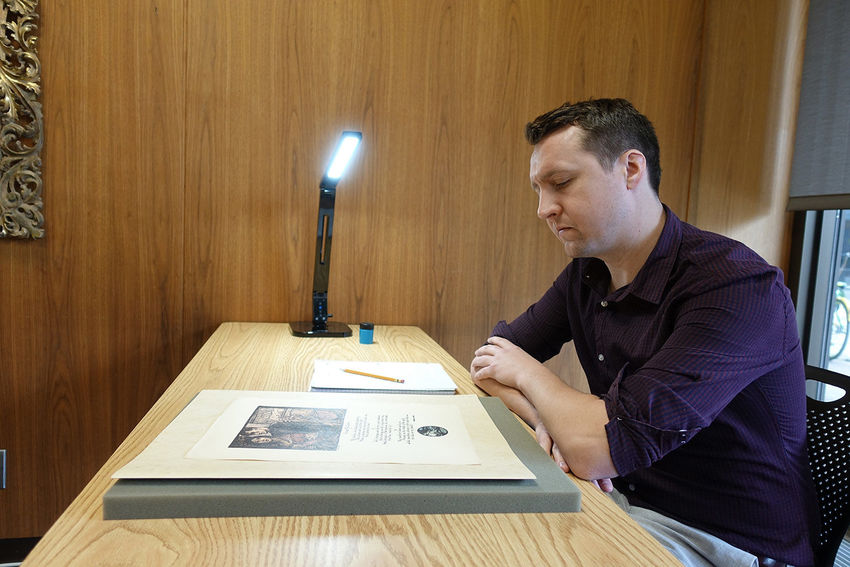 The Keough-Naughton Institute for Irish Studies and Notre Dame International are excited to welcome the first grant recipient to campus for the Keough-Naughton Library Grant Award in Irish Studies. Keelan Harkin, who recently completed his Ph.D. from McGill University in Canada, is spending two weeks on campus utilizing the collections of the Hesburgh Libraries to further his research in Irish studies.

“The scope of archives at the University is very impressive,” says Harkin. “It’s an honor to be the first awardee and I’m thankful for the opportunity.”

Harkin has been diving into the collections, focusing in on literature and politics in Ireland in the 1930’s. He’s also looking at manuscripts of unpublished works and letters from Tom O’Flaherty, a socialist writer from the 1930’s who mostly worked as a journalist.

“I’m hoping to gain insight into not just literary elements, which is my primary focus, but also this larger background of what was going on in Ireland in the 1930’s,” says Harkin.

Harkin is one of three recipients of the new grant, which seeks out established scholars, graduate students, and postdoctoral scholars. Sonja Tiernan, a former Keough National Endowment for the Humanities Fellow, from Liverpool Hope University in the United Kingdom and Aida Ramon from the University of Dallas also received the grant and will visit campus later this year. An important consideration of the grant is the relevance of the Hesburgh Library collections to the proposed research project.

“The importance of access to these collections varies,” says Aedín Clements, Irish studies librarian and curator of Irish studies collections. “For some, it might be the convenience of having many relevant books and editions in one place, to study them intensively, and for others it is access to manuscripts or a rare collection of prints or ephemera.”

Irish studies collections in the Hesburgh Libraries are broad and multi-disciplinary. The collections, primarily print, include a particularly wide-ranging fiction, a strong seventeenth and eighteenth century print book collection, and collections on Berkeley, Burke and Swift.

“The Hesburgh Library’s collections on Irish Studies are a wonderful resource for the Notre Dame community,” says Clements. “Scholars throughout the world could benefit if they spent some days or weeks among these collections."