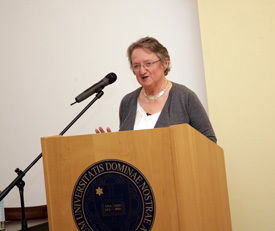 On March 24, 2014, the University of Notre Dame London Global Gateway hosted the Third Annual London Shakespeare Lecture in Honor of Stanley Wells, CBE, in collaboration with The Shakespeare Institute and Shakespeare Birthplace Trust.  The lecture, entitled “You need not tell us what Lord Hamlet said” Have we heard it all? was given by Ann Thompson, Emeritus Professor of King’s College London and General Editor of the Arden Shakespeare series.

The event was organized and hosted by the Director of the London Global Gateway, Dr Warren von Eschenbach, and Dr Boika Sokolova, Professor of Shakespeare for the London Undergraduate Program, who introduced Ann Thompson with a brief biography of her professional life and works.

The Q&A session included discussions about the parts of Shakespeare that do not advance the plot, editing in the 21st century, and Thompson’s favorite production of Hamlet.Thompson’s lecture focused on her experience of editing three versions of Hamlet for Arden publishers, and particularly, Act 3 Scene 1 and the famous “To be or not to be” soliloquy which she claimed “appears in a place which is difficult to justify in terms of character or narrative”.   She talked about the challenges of teaching, directing, and editing Hamlet while also highlighting and analyzing the differences in the three versions of the play, the varying interpretations onstage, the controversies surrounding performance and presence of characters in the scene, and the inconsistencies throughout. In her paper, Thompson questioned the meaning of Hamlet’s soliloquy and the placement of this speech within the play as well as discussed how editors tackle uncertainties and queries using footnotes and references.  Thompson concluded her talk by stating, “There is nothing straightforward about Hamlet…I cannot confidently tell you what Lord Hamlet said and I don’t think we have heard it all.”

Guests included Professor Stanley Wells, C.B.E. (Honorary President of Shakespeare Birthplace Trust), Rev. Dr Paul Edmonson (Head of Knowledge and Research, Shakespeare Birthplace Trust), students, distinguished academics, actors, directors, journalists and members of the general public.  About the lecture, Wells said, “It was the talk of an expert who knows all the texts of Hamlet like the back of her hand.  She succeeded in conveying the differences and their significance very well to the audience.”  Sokolova added, “In a manner typical of her deep and careful scholarship, Professor Thomson chose the most famous speech in the English language to question the foundations of our understanding of its role in Shakespeare’s play and problematize the stability of the meanings we attribute to it in criticism and performance.”

For further reading on this event, please see the review After Arden: Ann Thompson and Hamlet by Michael Caines, (The Times Literary Supplement).