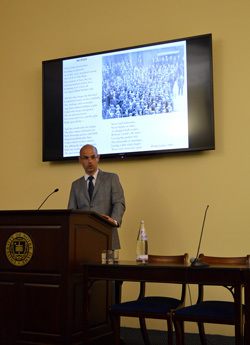 What Do We Remember When We Remember The Great War?  This is the question that Tobias Boes, Associate Professor of German at Notre Dame and visiting professor at the London Global Gateway, asked in his lecture yesterday, October 29, 2014.
The talk was part of the Annual Notre Dame Alumni-Student London Lecture Series, held at the London Global Gateway’s Fischer Hall.  Co-sponsored by Notre Dame International and the Notre Dame Club of United Kingdom – London, the series aims to bring together Notre Dame students, alumni, and leaders in academia and business from around the world to discuss topical and innovative issues.
Focusing on a selection of war-themed literature by Julian Barnes, Siegfried Sassoon, Philip Larkin, and Carol Ann Duffy, as well as monuments and commemorations such as the Menin Gate in Ypres and the installation Blood Swept Lands and Seas of Red at the Tower of London, Boes argued that the voice of experience is indispensible in truly remembering the war.  He discussed the idea that memory is no longer lived, as the last of those who fought in and lived through the war pass away, something that will also happen with the Holocaust and other genocidal catastrophes.  Linking the Great War to a wider twentieth century history, Boes also considered the idea that commemorative ceremonies are often a way for current generations to seek comfort in an idealized and “innocent” pre-war past.  Finally, he looked at countries in the European Union like Germany and France who have begun to consider memory in a larger narrative to challenge public memory and carry the dead into the present.
The talk was followed by a Q&A session in which the topics of discussion were the difference in atmosphere between cemeteries in Britain, America, and Belgium, the poems referred to in the talk and their possible German counterparts, Ireland’s commemoration, and increasing commemoration around the world.
Several members of the London alumni club, as well as London Global Gateway students and staff attended the lecture.  Melissa Guinan, Notre Dame alumna (2012) and 2014-15 Fulbright Scholar researching in London with the support of the London Global Gateway, said, "Professor Boes' talk was a timely reflection on collective remembrance as we approach Armistice Day in November.  I really enjoyed his inclusion of photos from his class' field trip to Ypres, and excerpts from war poets.  It illustrated the past 100 years of commemoration in historical and personal memory."