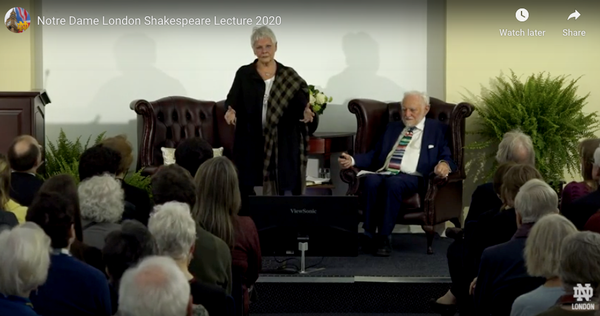 On Monday March 2, there was an excited silence as two legendary Shakespeareans took to the stage for the Notre Dame London Shakespeare Lecture. Professor Sir Stanley Wells, the most renowned British Shakespeare scholar, took his seat next to one of the world’s finest actresses, Dame Judi Dench.

“Judi still can illuminate a very simple speech with depths of imagination,” said Wells to the audience in his opening remarks.

The ensuing conversation was an example of her ability to do just that.

The discussion touched upon a wide range of topics, from her early life, to cross-gender acting, to set design. At Wells’ request, Dench gave impromptu speeches of past roles, letting the audience glimpse her masterful talent as a performer. Whatever subject was at hand, she wove in insights, anecdotes and her characteristic sense of humor.

On being asked to play the role of Cleopatra, she recalled “I was very surprised indeed, people used to laugh openly at me when I said I was going to play the part. Cleopatra? Really?!”

This humor was matched by her humility, and she never missed an opportunity to give recognition to those she had worked with in the past. When Wells complimented the diversity of her performance as Cleopatra, Dench replied, “I did have Anthony Hopkins playing Anthony, and divine Tim Pigott-Smith playing Octavius Caesar. As well as a lot of other wonderful people.”

Dench and Wells are old friends, and this was reflected in the personal nature of their exchange. At once, the audience was watching a conversational tennis match between two stars in their fields, as well as two close friends warmly reminiscing on their remarkable lives. This closeness meant the conversation was engaging and playful. Looking at a photo of Dench as Isabella in a 1962 production of ‘Measure for Measure’, Wells commented “You look pregnant”, to which Dench retorted, “Well that would put quite a funny twist on the play.”

The Notre Dame London Shakespeare Lecture in Honour of Professor Sir Stanley Wells was initiated by Professor Gregory Kucich and Shakespeare scholar Boika Sokolova in 2011. Envisioned as a celebration of a scholar of world renown, it is also a venue for students on the London program to meet leading academics and theater practitioners who shape their fields. The lecture series has developed in close collaboration with the Shakespeare Birthplace Trust in Stratford-upon-Avon and the Shakespeare Institute (University of Birmingham).

Jonathan Noble, senior assistant provost for internationalization, explained the importance of the Shakespeare lecture in his welcome address.

“The University of Notre Dame is a place of teaching, scholarship and research, but it is equally a place of service and community,” said Noble. “In creating a space where top academics, renowned practitioners, and the community come together to engage and share ideas, the Notre Dame London Shakespeare Lecture is a true embodiment of all that we hope to achieve as a university.”