October 3, 2022: ND Forum Event: The Suppliants Project: Ukraine
September 22, 2022: Voices from Ukraine
August 24, 2022: Opening Reception: Ukrainian Independence Day Celebration
May 9, 2022: Legal Challenges Posed by the Large-Scale Russian Invasion of Ukraine
April 12, 2022: The Economic Consequences of the Ukraine War - Past and Present
April 11-12. 2022: Collection for Ukraine Refugees - Campus Ministry is sponsoring a collection of clothing and money for refugees from Ukraine. All donations are welcome and will be used to assist refugees. Monday and Tuesday, April 11-12; students will be in front of North and South Dining Halls to accept anything you’re able to give.
April 7, 2022: U.S. Collegiate Student Solidarity Vigil for Ukraine
March 23, 2022: Solidarity with Ukraine
March 23, 2022: Pondering the Nuclear Posture Review After Ukraine
March 16, 2022: Solidarity and Prayer: Responding to War in Ukraine
March 11, 2022: A Dialogue with Ukrainian Students

October 4, 2022: "War in Ukraine, Peace in Europe? Geopolitics, Economics, and Security after Russia's Invasion": The Nanovic Forum with Kolinda Grabar-Kitarović

Kolinda Grabar-Kitarović, the former President of Croatia (2015-2020), delivers her Nanovic Forum lecture, titled “War in Ukraine, Peace in Europe? Geopolitics, Economics, and Security after Russia’s Invasion,” on Tuesday, October 4, 2022, at the University of Notre Dame. Hosted by the Nanovic Institute for European Studies 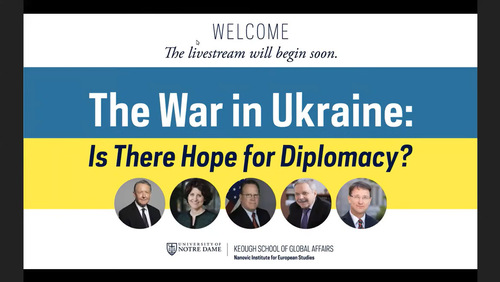 As an unprovoked act of aggression on a sovereign nation, Russia's invasion of Ukraine on February 24, 2022 represented a failure of diplomacy. Now over six months into the war, is there a role for diplomacy in bringing the conflict to a resolution? What effect has the war had on other diplomatic missions, relationships, and endeavors? This virtual flash panel, sponsored by the Nanovic Institute for European Studies, gathers diplomats and experts to discuss this question.

“Focus on Ukraine: Eyewitnesses to the War,” a virtual flash panel sponsored by the Nanovic Institute for European Studies, gathers scholars and experts on internationalization, Catholic higher education, and foreign affairs to discuss the war in Ukraine.

April 28, 2022: Beyond the West: Nationalism, Religious Literacy, and the Ukraine Crisis 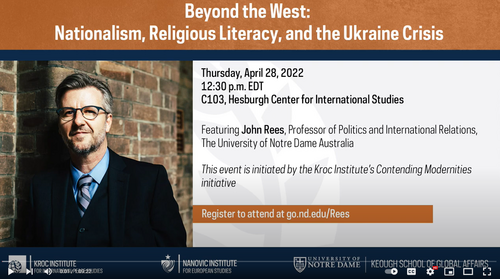 This lecture explores how the lead-up to war in Ukraine tragically exposed liberal blind spots toward nationalism and religion, and why unlearning these habits will aid in the struggle for peace. Featuring John Rees, Professor of Politics and International Relations, The University of Notre Dame Australia. Hosted by the Kroc Institute for International Peace Studies.

April 22, 2022: "Conversation with Anne Applebaum: The War in Ukraine, Russia, and the Twilight of Democracy" 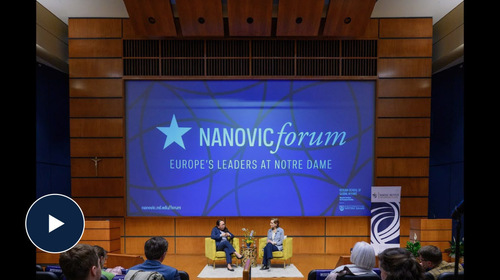 On April 22, the Nanovic Institute for European Studies was honored to bring Anne Applebaum, the Pulitzer Prize-winning historian and Polish-American journalist, to the University of Notre Dame for a special Nanovic Forum event. While the Nanovic Forum is typically an annual event, this was the second forum of the spring semester alone, an unprecedented fact owed to the Russian invasion of Ukraine. During “A Conversation with Anne Applebaum: The War in Ukraine, Russia, and the Twilight of Democracy,” the author spoke with Diane Desierto, professor of law and global affairs with a joint appointment in the Keough School of Global Affairs and the Notre Dame Law School, and took questions from members of the audience.

April 11, 2022: When Purpose Calls – Re-Engaging One’s Expertise To Address the Ukraine Invasion …and Beyond 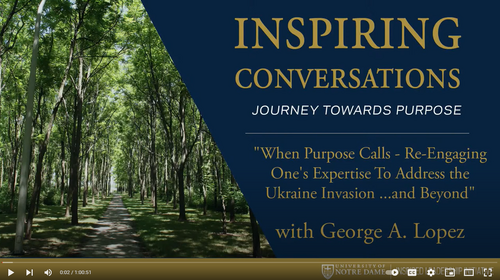 George Lopez, Professor Emeritus of Peace Studies at Notre Dame and a leading expert on economic sanctions and peacebuilding, joins ILI Founding Director, Tom Schreier, to discuss Russia’s invasion of Ukraine and the role and impact of economic sanctions in a conflict such as this. Hosted by ThinkND.

March 29, 2022: Russian Propaganda and Western Media: A View from Ukraine 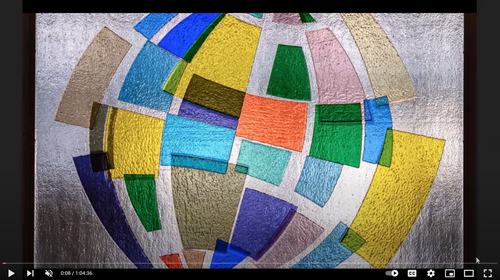 Join the Nanovic Institute for European Studies for a virtual panel with four Ukrainian experts who will discuss Russian media narratives, fake news, and propaganda, focusing on Russia's ongoing invasion of Ukraine.

March 22, 2022: Panel Discussion - Civil Resistance in the Ukraine and the Region 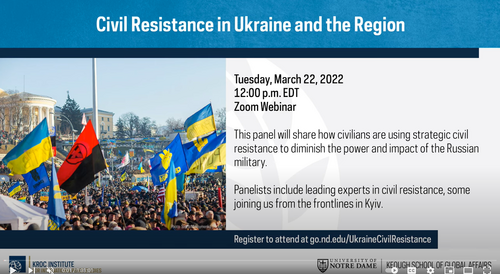 How does civil resistance work and what can it achieve? This panel will share how civilians are using strategic civil resistance to diminish the power and impact of the Russian military. In Ukraine, civilians replace road signs to confuse Russian military vehicles, they block roads with cement blocks and iron pins, and they have set up a complex humanitarian aid system with neighboring countries. Within Russia, protests and resignations by universities, media outlets, and professionals denounce the military invasion. Join the Kroc Institute for International Peace Studies to learn more about the strategy of civil resistance in Ukraine and the region. Panelists include leading experts in civil resistance, some joining us from the frontlines in Kyiv.

March 16, 2022: Panel Discussion - The War in Ukraine: A Global Perspective 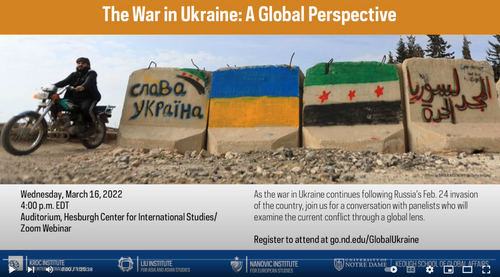 As the war in Ukraine continues following Russia’s Feb. 24 invasion of the country, the recording below is a conversation with panelists who examine the current conflict through a global lens. Panelists cover topics including the status of the current conflict and the international response, migration and refugees, connections between the current war and U.S. policies in the Middle East, and the response of China and India to the current war. Hosted by the Kroc Institute for International Peace Studies.

Join the Nanovic Institute for European Studies for a virtual flash panel as scholars respond to and discuss Russia's ongoing invasion of Ukraine. 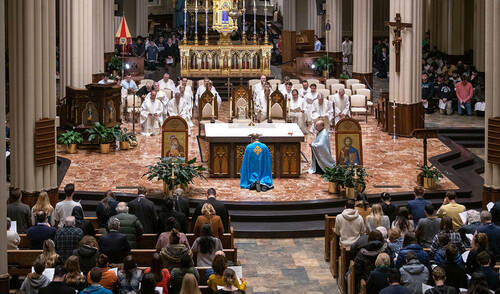 A prayer service for peace and the safety of the Ukrainian people was held at the Basilica of the Sacred Heart on Monday, Feb. 28, 2022. The prayer service was led by Father Andrij Hlabse, S.J., a theology Ph.D. candidate and Ukrainian Byzantine Catholic priest. Related story

February 24, 2022: Flash Panel in Response to Russia's Invasion of Ukraine 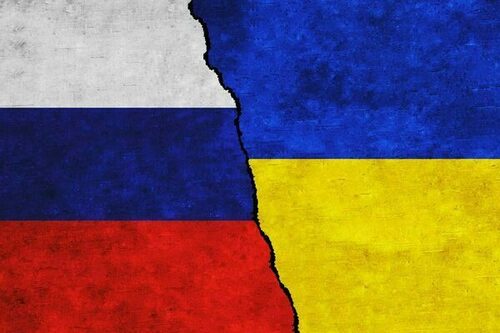 On Thursday, February 24, 2022, the Nanovic Institute for European Studies hosted an emergency flash panel in response to Russia's invasion of Ukraine.