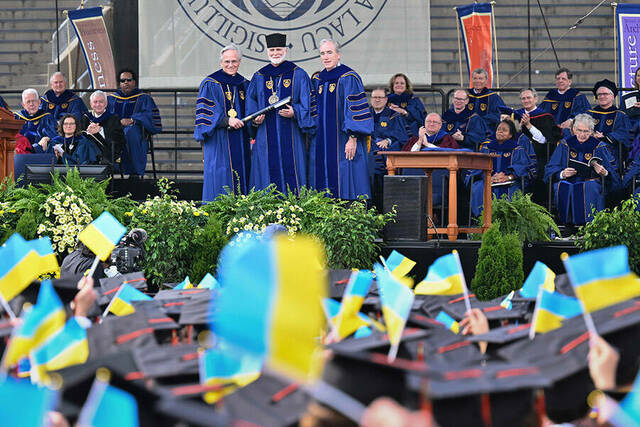 A Ukrainian academic on sabbatical experiences solidarity at Notre Dame
It is early March, and I am walking through Georgetown in Washington, D.C. I come across a campus of the Georgetown Visitation Preparatory School. I read the plate about its foundation in 1799 and its uninterrupted history for two centuries. Suddenly it occurs to me: I wish I could remember a single institution of learning in Ukraine that could enjoy at least 50 years of existence without any major disruption.

Standing in solidarity: Notre Dame expands partnership with Ukrainian Catholic University
University of Notre Dame President Rev. John I. Jenkins, C.S.C., and Metropolitan-Archbishop Borys Gudziak, organizer and president of Ukrainian Catholic University (UCU), entered into an agreement today to significantly expand the existing academic, religious and cultural partnerships between the two universities. The enhancements come in advance of Notre Dame conferring an honorary degree on the archbishop Sunday in its 177th University Commencement Ceremony, where he will also serve as the principal commencement speaker.

Ukrainian Archbishop Borys Gudziak to deliver Notre Dame’s 2022 commencement address
Metropolitan-Archbishop Borys Gudziak, the highest-ranking Ukrainian Catholic prelate in the United States and organizer and president of Ukrainian Catholic University (UCU), will be the principal speaker and receive an honorary degree at the University of Notre Dame’s 177th University Commencement Ceremony on May 15, 2022.

The bonds between Notre Dame and Ukraine
Notre Dame’s relationship with Ukraine is in large measure related to its close ties with Ukrainian Catholic University (UCU), established in Lviv in 2002 as the first Catholic university founded on territory of the former Soviet Union.

The Professors
Archbishop Gudziak gave University President Rev. John I. Jenkins, C.S.C., a tour of Emmaus House June 27, two days before Father Jenkins presented the archbishop with the 2019 Notre Dame Award for his work in founding and growing the first Catholic university in former Soviet territory.

Fighting for Freedom of Thought
A. James McAdams, the William M. Scholl Professor of International Affairs and, at the time, the director of Notre Dame’s Nanovic Institute for European Studies, gives Elly Bleier '20 the opportunity to teach at UCU, and with it a deeper understanding of the country where she was born, and its people and culture.

The Catholic Universities Partnership
The Catholic Universities Partnership, formed under the leadership of the Nanovic Institute for European Studies at the University of Notre Dame, includes the Ukrainian Catholic University, which hosted the annual conference in Lviv in 2008. Since then, more than 20 faculty members at UCU have spent time at Notre Dame through the Nanovic Institute's visiting scholars program. The partnership began in 2003 as an initiative to foster mutual support, elevation, and development of Catholic higher education and civil society in post-communist and post-Soviet Europe.