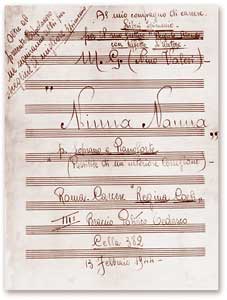 Commers Macartan and Sam X. Zhuang are two architecture students and musicians from the University of Notre Dame. Macartan plays the piano and Zhuang is a singer. While in Rome, they are attending the Textual Analysis Italian Course for Architects with professor Chiara Sbordoni. As part of the course, they worked on a community-based learning project inspired by their visit to the Museum of the Liberation in Via Tasso. The museum occupies three floors of the building that once hosted the headquarters of the Sicherheitspolizei, and was established to record the period of German occupation and Rome’s subsequent liberation. Among other things, it collects evidence of messages scratched in the plaster by the prisoners, copies of newspaper reports, posters imposing bans, and anti-Jewish orders, objects, clothes, and documents of the prisoners.

During the visit, Macartan and Zhuang turned their attention to a music sheet and a letter. The music sheet was dated February 13, 1944 and it was written by Father Giuseppe Morosini. The title of the music for piano and soprano was “Ninna Nanna – Lullaby,” dedicated to Epimenio Liberi, his fellow prisoner. Father Morosini was imprisoned and shared a cell in Regina Coeli with Epimenio Liberi, who was expecting a baby with his wife waiting for him outside. Father Morosini decided to compose the music and the words of a lullaby dedicated to his friend’s pargolo biondo – blond baby. The sheet music was accompanied by a letter from Liberi to his wife, dedicating the lullaby to her as a present of hope for their baby. In the letter, he explained how surprised he was that the priest who wrote it became such a dear friend. The priest offered to baptize their baby, once the war was finally over. 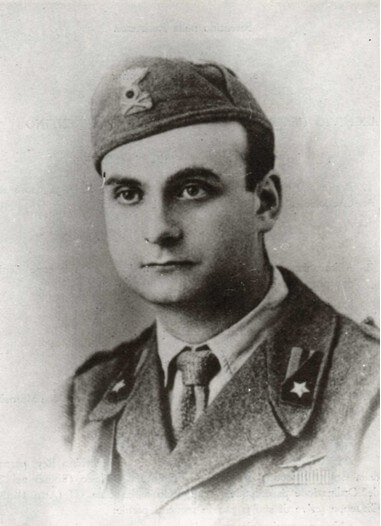 Father Morosini was executed at Forte Bravetta on April 3, 1944, while his fellow prisoner lost his life in the Ardeatine massacre on March 24, 1944, when 335 victims were taken from the prisons of Via Tasso. Unfortunately, the news of Liberi’s murder caused his pregnant wife to miscarry, losing their unborn child. She never got to hear Father Morosini’s lullaby nor read her husband’s letter.

Macartan and Zhuang were drawn to this story because of their love of music. They were inspired by the music sheets as a means of hope through dark times. They wanted to give new life to that music and to the baby who was never born.

On the final project day, in a magical atmosphere, Macartan sat at the piano and started playing the first notes from the original music sheets. The silence was broken by a sharp melody when Zhuang joined him in the delicate song:

Above the cradle of the beloved child, a young mother sings the lullaby to her blond child. There is a fairy castle by the sea, there is a king’s castle above the earth, there is a blonde queen of maids, and there is a sweet Madonna among the stars. The king’s castle is your cune and the blonde queen is your mother who repeats to you in chorus with the fairies the most amorous sweet lullaby: you sleep, oh sweetheart, over the head there is the Madonna, above your heart there is my heart.