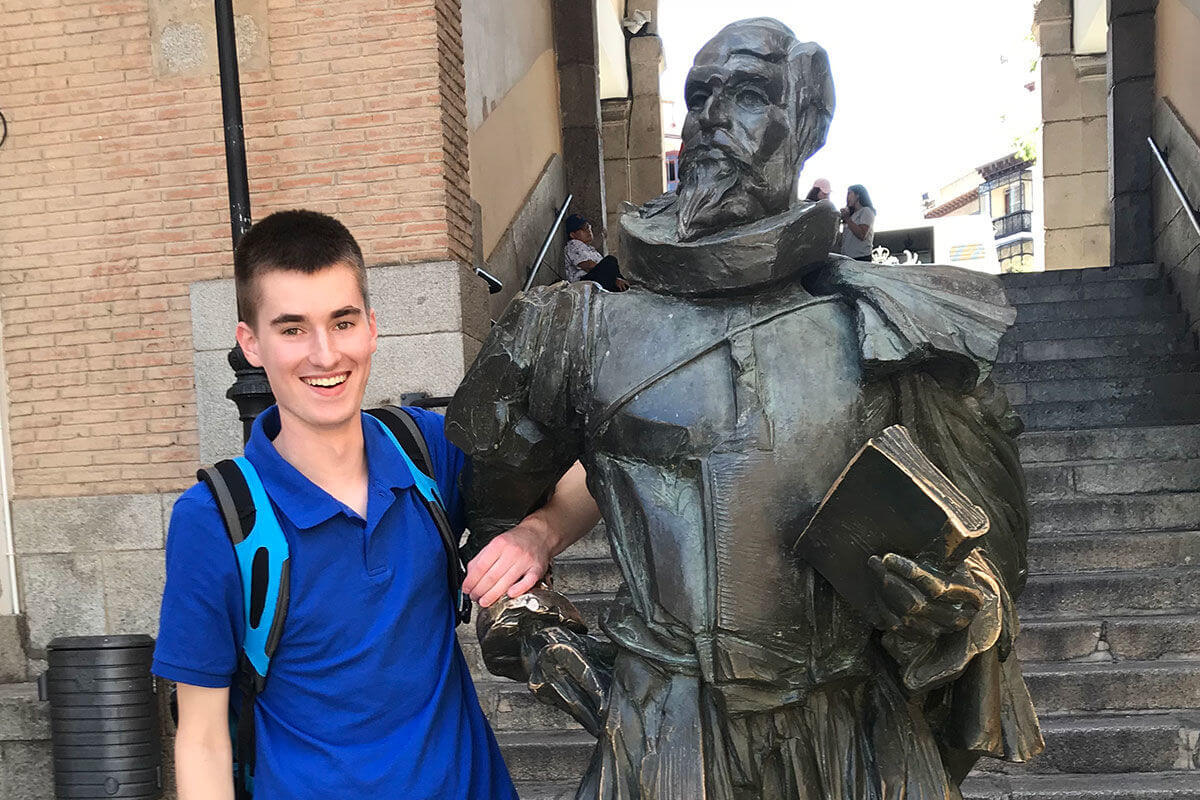 Peter Sabini poses with a statue of Miguel de Cervantes while studying abroad in Toledo, Spain.

On the way to graduating with majors in Spanish and music, senior Peter Sabini has rekindled old intellectual flames, discovered new passions, and found a future that combines them all.

Sabini has studied abroad in Toledo, Spain, scored music in a studio in New York City, and is now translating 40 Spanish poems into English for his senior thesis.

“Four years is too short,” he said, “but I got to do a bit of everything.”

“Music is like my third language. In music, you can translate a feeling that the chords or rhythm give you into the lyrics for a song. Translating from Spanish to English is a similar process of creative paraphrasing.”

When Sabini arrived at Notre Dame four years ago, he was interested in a wide variety of disciplines — including English, psychology, and music. But he soon found that the devotion to service and the Spanish language he developed as a teen would define his academic pursuits. 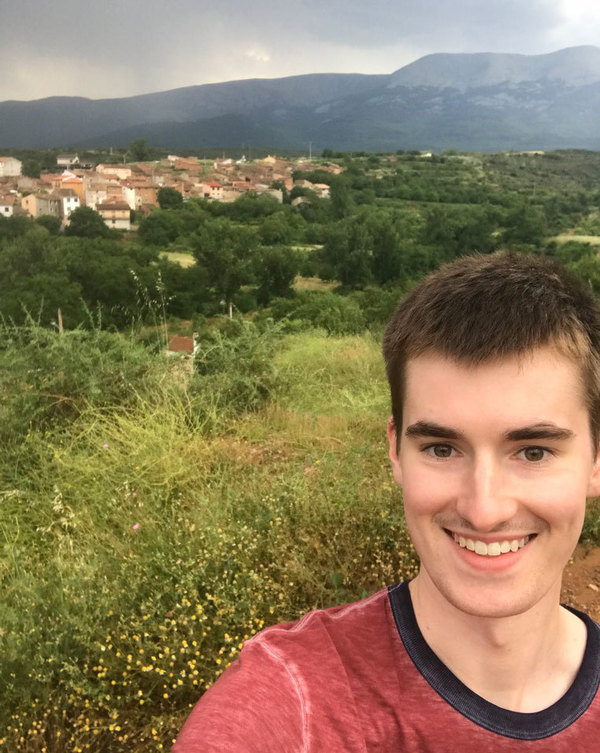 After Sabini began delving deeper into literary analysis in his Spanish classes, he knew he wanted to major in it.

In middle school and high school, Sabini traveled regularly to Ecuador on medical mission trips, working with children at a local clinic and translating for a team of doctors, including his father.

When he began delving deeper into literary analysis in his Spanish classes at Notre Dame, he knew he wanted to major in it.

“Total fluency in Spanish is a goal of mine,” he said. “I am the only one in my family who speaks it, but it clicked with me right away.”

Sabini, who plays the saxophone, piano, guitar, and drums, had considered applying to a conservatory before deciding to pursue a more holistic liberal arts education. At Notre Dame, he found the space to explore a passion he can’t live without.

Sabini was inspired by a seminar on movie musicals with Margot Fassler, the Keough-Hesburgh Professor of Music History and Liturgy, that he took his sophomore year.

He recalls that a character in a documentary they watched in class said, “give yourself to music,” and he did just that.

“I believe in the power of music, however cliche that might sound, and my goal is to get to a point with my music that I can touch other people’s lives and make listeners feel something just through a song,” he said.

Sabini spent the summer after his sophomore year in Toledo, Spain, taking a modern Spanish literature class and organizing music scores and scripts at a local conservatory.

Over manchego cheese and steaming tortillas, Sabini discussed politics and pop music with his host family. There, he saw a country still reeling from dictatorship as well as a culture with strong family values “where people would give up higher salaries to be closer to home.” 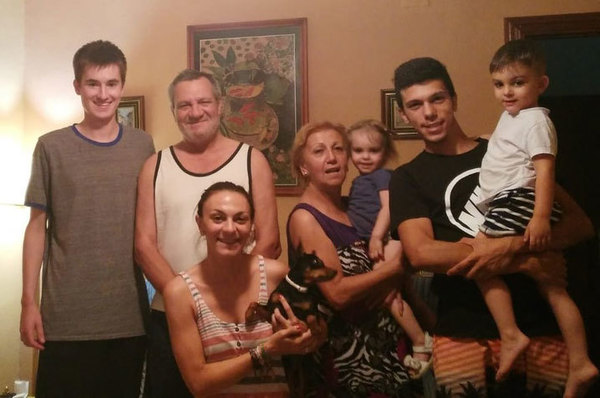 Sabini with the host family he lived with in Toledo, Spain.

“Being able to go abroad and really communicate with native Spanish speakers has only deepened my appreciation and love of the language,” he said.

The following summer, Sabini discovered the career path he wants to pursue while completing a screen-scoring workshop at New York University — an opportunity he found through a Notre Dame alumnus.

For six weeks, Sabini transformed the fascination with songwriting and music theory he had nurtured in O’Neill Hall into reality.

For Sabini, there was nothing more exciting than composing music for video games, advertisements, TV shows, and movies and then having his work critiqued by acclaimed composer Mark Snow, who wrote the theme music for The X-Files and many other TV series.

Talking to representatives from various advertising agencies also gave Sabini exposure to the business side of the industry.

“It’s important to understand the financial accounts and the demands placed on a freelancer in what is a very unstable industry,” said Sabini, who also has a minor in business economics.

Back on campus, Sabini found there was more overlap between his summer experiences than he realized — the two intersect in translation.

“Music is like my third language,” he said. “In music, you can translate a feeling that the chords or rhythm give you into the lyrics for a song. Translating from Spanish to English is a similar process of creative paraphrasing.”

Now, Sabini is combining all of his interests in his senior thesis.

In creating an English translation of works by Carmen Pellot — a Puerto Rican poet he encountered in a poetry class sophomore year — Sabini is doing everything he loves, incorporating psychology, literature, gender, race, and music.

After graduation, Sabini plans to teach English for a year in Spain, before going to graduate school for music and eventually pursuing a career in TV and film production as a composer. One day, too, he would like to compose a full song in Spanish.

No matter where his journey leads, Sabini knows he is ready to leave Notre Dame and to embrace the complexity and wonder of the world.

“Arts and Letters has given me the opportunity to find myself and to be confident in who I am — whether that’s studying music formally or going abroad,” Sabini said. “It has helped me to step out of my comfort zone — and in doing so, I created a bigger comfort zone.”

“Arts and Letters has given me the opportunity to find myself and to be confident in who I am — whether that’s studying music formally or going abroad. It has helped me to step out of my comfort zone — and in doing so, I created a bigger comfort zone.”

Originally published by Ashley Lo at al.nd.edu on October 17, 2019.