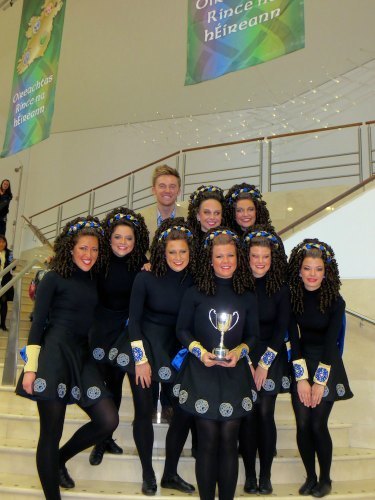 traveled to Belfast, Northern Ireland to compete in the All-Ireland Irish Dance Championships. This is the third year the team has competed in this international competition.

Three years ago, Katie Grennan (ND '10) and Deirdre Robinett (SMC '10) spearheaded the first ND/SMC All-Ireland's Ceili Team, a group of 8 girls to perform two group dances of differing tempo. These trailblazers brought home a win for both Universities and the USA, competing against teams from all over the world. In 2012, another team led by Connor T. Reider (ND '14) traveled to Dublin to compete and once again brought home the championship trophy.

While abroad, the team was able to explore both Dublin and Belfast, as well as take a tour of some major sites in Northern Ireland, including the Giant's Causeway and the Carrick-A-Rede rope bridge. "For many of the dancers, this was the last time they will ever compete on the international level. Congratulations to them all and we wish them the best in the future," says Reider.

The team received the support of Tara MacLeod, who accompanied the team on the trip as its faculty advisor, as well as the Keough Naughton Institute for Irish Studies, Nanovic Institute for European Studies, Darden Primary Center, Fiddler's Hearth, SAO and the Michiana Celtic Festival.