The Keough-Naughton Institute for Irish Studies at the University of Notre Dame announces the Seamus Heaney Memorial Lecture on Thursday, August 28th at 4 PM in the Morris Inn on campus. ‘To set the darkness echoing’: in memoriam Seamus Heaney, 1939-2013” will feature a poetry reading by Nuala Ní Dhomhnaill and remarks by John Kelly.

The lecture honors the celebrated Irish poet who was awarded the Nobel Prize in Literature in 1995 “for works of lyrical beauty and ethical depth, which exalt everyday miracles and the living past”. 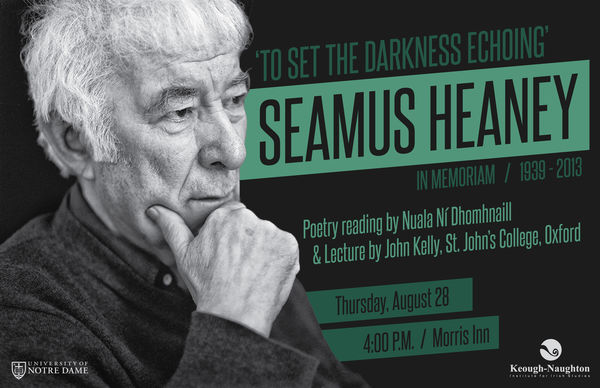 In his Nobel lecture Heaney credited poetry for its “power to persuade that vulnerable part of our consciousness of its rightness in spite of the evidence of wrongness all around it, the power to remind us that we are hunters and gatherers of values, that our very solitudes and distresses are creditable, in so far as they, too, are an earnest of our veritable human being.”

At the memorial lecture Ní Dhomhnaill, renowned Irish language poet, will read an elegy she wrote for Heaney as well as two of her poems, Mo Mhile Stór and Féar Suaithinseach, which Heaney translated into English.  Her accolades include winning the American Ireland Fund Literature Prize, and her work has been translated into multiple languages.

John Kelly, Emeritus Research Fellow at St. John’s College, Oxford, has written extensively on 19th and 20th-century literature and is General Editor of The Collected Letters of W. B. Yeats, which is being published in 12 volumes. He has also edited and introduced a 12-volume series of Irish fiction, poetry and essays of the nineteenth century, under the title ‘Hibernia: State and Nation’, and his W. B. Yeats Chronology appeared in 2003.  He joins the Keough-Naughton Institute this fall as Distinguished Donald R. Keough Visiting Professor.

While difficult to measure his influence, at Heaney’s passing last August, Irish Prime Minister Enda Kenny said, “For us, Seamus Heaney was the keeper of language, our codes, our essence as a people.  He belongs with Joyce, Yeats, Shaw and Beckett in the pantheon of our greatest literary exponents.”

“It is appropriate for us at the first anniversary of his passing to reflect on the life and work of one the greatest Irish poets who enjoyed a special relationship with the Institute and Notre Dame,” notes Institute Director Christopher Fox.

The lecture is free and open to the public.

Originally published by Margaret Lloyd at irishstudies.nd.edu on August 14, 2014.