Sydney Schneider is a slender and gentle study abroad student from Laingsburg, Michigan. She is a Theology and History major at the University of Notre Dame, spending her Fall 2017 semester in Rome as part of the General Education program.

She came to Rome to immerse herself in the culture, improve her knowledge of Italian, but also to search for her family roots. 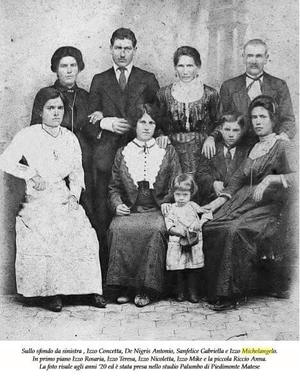 Before leaving to Rome, in fact, she and her father began researching their family history. They came to discover that Sydney’s great-great-great grandfather, Raffaele Izzo, migrated to America from a small town called San Potito Sannitico in Southern Italy. Raffaele sailed from Naples to New York on the SS Utopia in March 1888 and then travelled to Saginaw, Michigan to join his brother Daniele. Daniele and Raffaele operated the Izzo Brothers fruit market in the 1890s, both got married and raised two beautiful families. While their sister died as an infant, their brother Angiolo stayed in San Potito where he raised his own family, which still lives there today.

Upon arriving in Rome, Sydney decided to visit her ancestor’s small town and wrote to San Potito’s town secretary to find out the best way to get there from Rome. Days passed and Sydney began to think she would never get a response until, one day, finally, an email from the town historian did arrive. It was from Nicolino Lombardi, who happened to be himself one of her distant relatives, the son of Michelangelo Izzo and Gabriella Sanfelice, and was was inviting her to visit the town and meet all her distant relatives in person.

In early November 2017, Sydney and her boyfriend took a train from Termini station to Caianello (CE), full of excitement and expectation. As soon as they got off the train they were 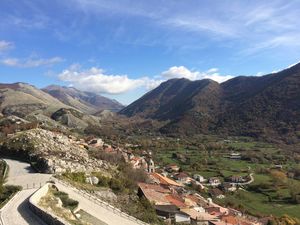 embraced in a warm hug. Nicolino and his daughter Michela were waiting for them at the station and drove them to San Potito Sannitico. As they arrived Sydney thought that the place was much more beautiful than she expected; a small town of 1.922 residents, surrounded by mountains and part of the Regional Matese Park. Everyone was approaching them full of curiosity, waiting to know what brought two young Americans to that small town.

Sydney had the chance to visit Nicolino’s house, meet the whole family, taste their home made olive oil, and celebrate Nicolino’s wife birthday. They took her for a visit of the town, including the cemetery to see her ancestors’ graves as well as the street where her great-great-great grandfather lived.

At night all Sydney’s distant relatives in town decided to invite her over for dinner and meet her. As the door opened, Sydney found more than 50 people waiting for her; they had cooked every kind of traditional food, tables were laid, there was music and traditional dances. 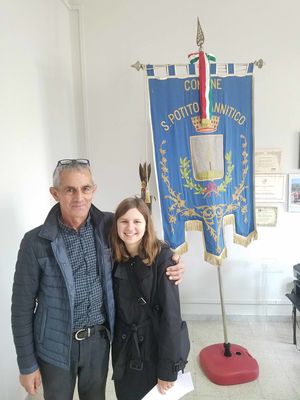 When it seemed that every possible thing had already happened, then the unpredictable took place. Once Sidney returned to her B&B, the host asked for Sydney’s linguistic help with a couple of young Americans who had just arrived. Sydney discovered that they too were in search of their family roots and lo and behold their ancestors, the Brandi family, migrated to America to join Sydney’s ancestors, the Izzo family, in the small town of Saginaw, Michigan. Sydney could not believe it! It was as if their ancestors were somehow meeting again in their hometown through their great-great-great grandchildren.

Time flew by and after three intense and exciting days it was time to say goodbye. Leaving was hard; hugs, tears and promises of meeting again soon were made.

What does being a family mean? It means loving and accepting people as they are, giving everything to them without asking for anything in return, sharing sincere moments and understanding. No distance can break a family bond and even after centuries that bond is inevitably visible and strong. Sydney felt part of the family as soon as she came off the train, and now that she has found her roots they will remain a part of her wherever she may go.